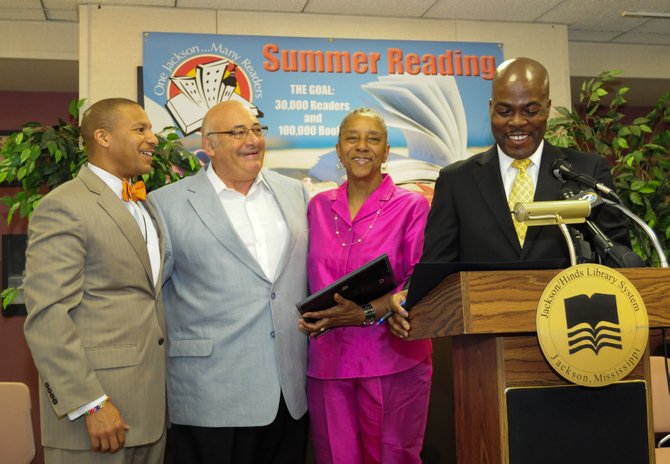 Richard and Sandra Koritz recently liquidated their book publishing company and donated some 34,000 books to the City of Jackson in memory of the late Mayor Chokwe Lumumba, whom the couple admired. Photo by Trip Burns.

Although Richard and Sandra Koritz are not originally from Mississippi, it's safe to say they have earned their place as honorary Jacksonians thanks to their recent donation of more than 34,000 books to the City of Jackson in memory of the late Mayor Chokwe Lumumba, whom the couple greatly admired.

As a result of their donation, the City of Jackson offered all area schools and daycares an opportunity to request portions of the donation. JPS has specifically been the recipient of about 7,250 books.

Patty Furr, executive director of the Jackson-Hinds Library System, addressed the state's issue with illiteracy at a press conference honoring the couple at the Eudora Welty Library last Wednesday.

Furr explained that it is the hope of the library system that the newly donated books will go toward improving not only education but several of the city's major issues.

"This issue of literacy is just such a key one in the city of Jackson," Furr said. "So many of the problems we see—the need for a new jail, poverty and unemployment—many of those issues can be solved by getting children reading: starting young, getting them excited about reading and keeping them reading."

As the second owners of Open Hand Publishing, the couple explained that the company, based out of Greensboro, N.C., eventually fell on hard times, which led them to search for a way to phase out the company. However, they wanted to ensure that the black-history based books would continue to serve a greater purpose. Langston Hughes, Zora Neale Hurston, Maya Angelou and James Baldwin are just a few of the authors included in the book collection, which were all republished by Open Hand.

The school system's community-partnered summer reading program, "One Jackson ... Many Readers," will ensure the books are distributed as widely as possible, which will include not only the school system but youth programs and museums as well.

Newly appointed Jackson Chief Administrative Officer Gus McCoy presented the couple with a certificate of appreciation on Mayor Tony Yarber's behalf at the press conference. "While you want the mayor's office to be concerned with paving streets, the greatest service that we can do to the community is to create a path to the minds of our children," McCoy said to the attendees.

Upon receiving the certificate, Richard Koritz explained that their reason for the donation was because of the city's multifaceted approach to expand education, which would use the donation to its fullest capacity.

Also, although the couple never got the chance to meet the late mayor, they decided that the donation would be their way of paying tribute to their deep respect for Lumumba's vision for civil rights.

"One of the great things about Chokwe Lumumba, to me, without ever having known him, is that his revolutionary black nationalism was not at the expense of others," Richard said. "It was focused on the uplifting of a solely oppressed people and at the same time uplifting the entire human race."

Before owning the publishing company, Richard worked for the postal service. However, he was involved in activism during the civil rights movement and even participated in the legendary March on Washington in 1963. He currently serves on the board of directors of the International Civil Rights Center and Museum in Greensboro, N.C.

"The fact that a black nationalist could be elected as mayor of such an important city in the deep south was inspiring," Richard Koritz said in an interview. "Reading about what he was doing here and what he was accomplishing was even more inspiring."