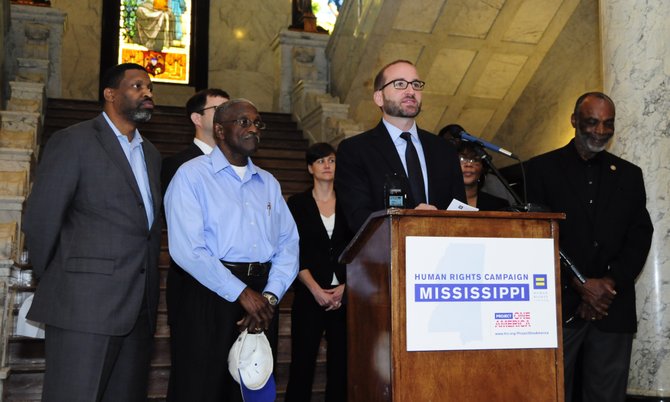 On a stop of his tour through the South, Human Rights Campaign President Chad Griffin (at podium)—along with several state representatives—spoke at the Capitol this morning about the HRC's newest permanent campaign, Project One America. Photo by Trip Burns.

On a stop of his tour through the South, Human Rights Campaign President Chad Griffin—along with several state representatives—spoke at the Mississippi Capitol this morning about the HRC's newest permanent campaign, Project One America.

The project, which HRC first announced last month, is the largest coordinated campaign for LGBTQ equality in the South's history, with a three-year budget of $8.5 million and a dedicated staff of 20. The campaign will encompass Mississippi as well as Alabama and Arkansas. The HRC hopes this campaign will aid in securing protection at the state and local level for the LGBTQ community in employment, housing, public accommodations and marriage equality.

"HRC has long been the largest national LGBT organizer in the South," Griffin said. "But today, we are proud to join with these advocates who have been working in Mississippi for decades to begin a new chapter in this movement for full and complete equality."

State Rep. Jim Evans, D-Jackson, spoke to the press, saying that he stands by the HRC because he has stood beside many other minorities to fight for their rights, and plans to continue to do so for the LGBT community.

"I've been fighting for justice in Mississippi for over 50 years," Evans said. "I've come calling for justice for every group or nationality you can think of, because I believe in something that's in the Preamble of our Constitution that says 'under God with liberty and justice for all'—and that excludes nobody."

State Reps. Rufus Straughter, D-Belzoni, and Alyce Clarke, D-Jackson, as well as representatives from ACLU of Mississippi and Equality Mississippi, were also present and spoke in support of HRC's campaign.

Derrick Johnson, state president of NAACP, spoke on behalf of Freedom Summer, which he said represents America's promise of equal protection under the law and is inclusive of the LGBTQ community.

Johnson also spoke in regard to SB 2681, the Religious Freedom Restoration Act that Gov. Phil Bryant signed last month, which many fear will allow businesses to legally discriminate against the LGBTQ community.

Griffin said that although the new HRC offices for the project will open soon in Jackson, a decision has not been made on their exact location; a decision should be made in the coming weeks.