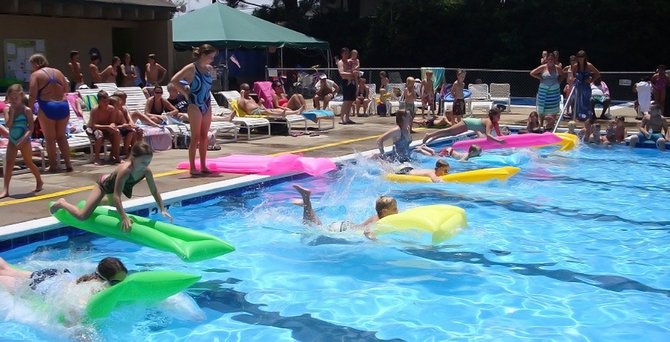 The story of the Briarwood Dolphins swim team is truly one of hope and diligence.

Over the last few months, both parents of the team and community members, Friends of Briarwood Pool, have pulled together to raise money for the pool. They want to ensure that the team has a place to practice and compete and that the YMCA can continue to being a source for youth development and community nourishment.

The pool, located in northeast Jackson, has been a staple within the community for decades and when it became in danger of closing late last year due to a lack of funding—$43,000 for plumbing repairs—the community fought to keep the doors open.

Jill Morgan is the self-proclaimed "swim-mom" of her two children, Veke and Anabel, who participate on the team. Upon finding out the pool would be closed, Morgan, a business transformation analyst at Entergy and the chair of the swim team committee, began communicating with other parents and community members for help raising funds for the pool's repairs.

"Everything started kicking off in January," Morgan said. "We formed Friends of Briarwood Pool... and community involvement has just been great."

Morgan and other members helped facilitate community meetings with the YMCA board. It was agreed at a meeting in late March that Friends of Briarwood Pool would help raise the money for the repairs in exchange for keeping the doors open to members and the swim team's continued use of the pool for practices and competitions.

Phil Eide, a parent who contributed to Friends' efforts, set up an account with Indiegogo, an international crowd-funding website where anyone can raise money for a variety of campaigns, to raise $15,000. That sum would pay for enough repairs to keep Briarwood pool open for the summer. Through word of mouth and the Briarwood Dolphins Facebook page, community members began to contribute to the cause. Friends even set up a fundraising committee that attended other local community meetings to gather more support.

"The amazing thing was that it wasn't just a few people contributing," Eide said. There were about 86 people that contributed over a period of maybe 30 days it really was amazing—people just came out of the woodworks and contributed."

Morgan says Friends not only met its quota but also ended up going a little over. However, she says their effort will not stop there, and Friends will continue in their fundraising efforts. Friends has set up a Briarwood Dolphins bank account to manage funding, and more repairs will be fixed as more money becomes available.

Since the group secured the funds, Friends has hosted community cleanups, which included repainting bathrooms and yard work, to help beautify the area around the pool. Plumbing repairs have also gone into effect, including the replacement of sinks and pipes.

Registration for the team will continue throughout May, with competitions beginning in June. The pool itself will be open throughout the summer, beginning May 26 until September 1.

With everything on schedule with the pool's repairs, Morgan said a lot of relief came from being able to tell the kids that the team would be able to begin practicing and competing again.

"We had this time period before where we were really uncertain about the pool ... and it was really nice being able to tell them that the pool was going to open, and we were going to have a swim team," Morgan said.

"They were very excited—it's their summer home."