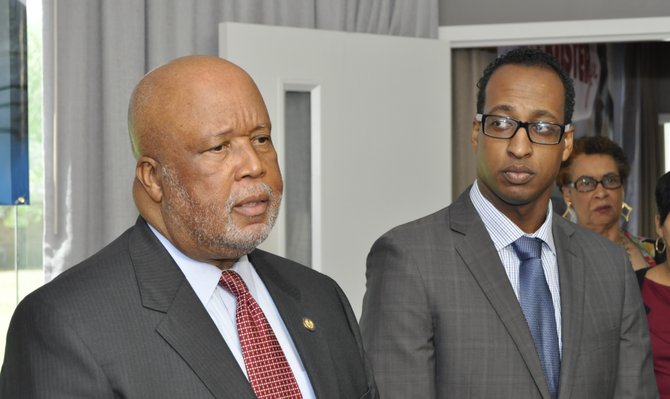 A close listen to Melvin Priester Jr.'s radio ads and policy ideas, which echo U.S. Rep. Bennie Thompson's oft-repeated frustrations of Jackson's failure to apply for federal money, was enough to guess whom Thompson would support in the mayor's race.

This morning, Thompson made it official, publicly endorsing Ward 2 Councilman and City Council President Priester at a press conference at Priester's law office in north Jackson.

Thompson, whose congressional district represents the majority of Jackson, cited several reasons for his endorsement of Priester, particularly Priester's drive to transform Jackson into a more nationally competitive city.

"The capital city clearly needs someone with the vision, ability and passion to get the job done," Thompson said this morning. "I have known Melvin Priester Jr. his entire life and have watched him graduate top of his class at Murrah High School, finish college and law school, and return home to make a difference in our community. I have worked with Melvin Priester Jr. on various projects involving his ward and have been impressed with his desire to make the capital city a showplace for the state of Mississippi."

Thompson added that he chose to endorse Priester, as opposed to the other candidates—a year ago, Thompson supported then-Councilman Chokwe Lumumba, whose son is currently in the race for mayor—because Priester most aligns with Thompson's vision for the city of Jackson.

"His platform of economic development, expanded affordable housing, infrastructure development and public education advancement will improve the lives of people throughout the city of Jackson," Thompson said. "There are ample state, federal and private resources available to address the city of Jackson's challenges. Melvin Priester Jr. has the knowledge and skills needed to take full advantage of these opportunities and create a prosperous Jackson."

Priester expressed gratitude for Thompson's endorsement, stating that his endorsement was particularly special due to Thompson's ability to always stand up for the people of Jackson and the example he has set for "integrity, honesty and hard work," which Priester said he also plans to bring to the city of Jackson.

So I guess his support for chokwe was not genuine. Thats politics...where you can be bought by the migjty $$$$.. Did nt you hear thompson in the commercial "Im looking forward to working with him" that means , he owes him.