A Tale of Four Seasons 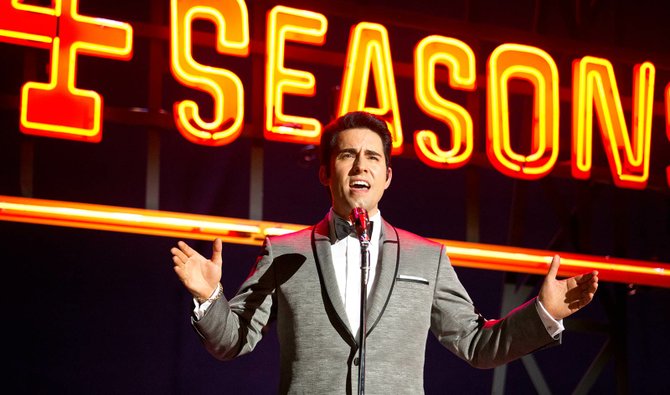 After one of the best trailers of the year, it's curtain time for the recent film release "Jersey Boys." With a screenplay by the original Broadway playwrights Marshall Brickman and Rick Elice, and the directorial grandeur of Clint Eastwood, the film is thoroughly entertaining, yet much darker than the play.

The story of Jersey boy Frankie Valli is one of American pop culture and music history. A blue-collar kid, he aspired for so much but expected so little. As Valli cruised toward the life of a rough and tough petty criminal, he shrugged off imaginary limitations, exposed his own uncanny voice potential and broke into the emerging world of sexual creativity. But after his rise to fame, life got the best of Valli and his group, The Four Seasons. While regarded as music revolutionaries, the group never attained iconic status; the streets of Jersey followed and haunted them throughout their entire career.

John Lloyd Young, who played the original Frankie Valli in the Broadway adaptation, returns for Eastwood's emotionally stirring film. Simply put, Young has Valli down pat. Vincent Piazza from HBO's "Boardwalk Empire" nearly steals the film as Four Seasons' member Tommy DeVito. As the true bad boy of the group, DeVito and his actions were the group's catalysts for self-implosion through his career and personal troubles.

While the play touches on the woes, they are swept aside by an immediate glitzy musical number. On the other hand, the film, with its budget, duration, and cinematic platform, holds nothing back. It lulls in the dark places but manically rises back to musical happiness—just as the group did.

Sex, drugs and pop music are on full display starting in the film's late 1950s-era New Jersey setting. The period look of the film—sets, props, costumes and hair—is amazing. Even the champagne stemware adds to this alluring yet troubling story. And with so much oil and grease on screen, the fact that it's truly 2014 might just slip your mind.

At first thought, I would have never imagined Eastwood, a West Coast jazz fanatic, directing an East Coast pop musical, but his directorial choice and aim works here. In actuality, Eastwood probably found sympathy and solace in the story of Frankie Valli. It's a good bet that's why he took it on. As Valli did in music, Eastwood did in film; they struggled and struggled but eventually made it—big time.

Contrary to the snappiness of the Broadway play and the quick-cut editing of the music video generation, Eastwood has a penchant for classic cinematic camera movement and long-thought storytelling. Both work well here in "Jersey Boys," since the story of The Four Seasons is so dark. They had loving families, monetary success and newly earned respect and fame, but the same things that built them up also tore them down.

I would be remiss if I did not mention actor Christopher Walken's great part as enigmatic friend and foe, mob boss Gyp DeCarlo. Walken and his super-unique demeanor never disappoint. As for the script, it is solid. The film breaks the fourth wall when the characters speak directly to the audience. The Four Seasons each have a turn at narrating the story—their story, the way they saw it.

Does the film have a foregone conclusion or an expected ending? It absolutely does, but who cares; it's the torrentuous, visual journey that counts.