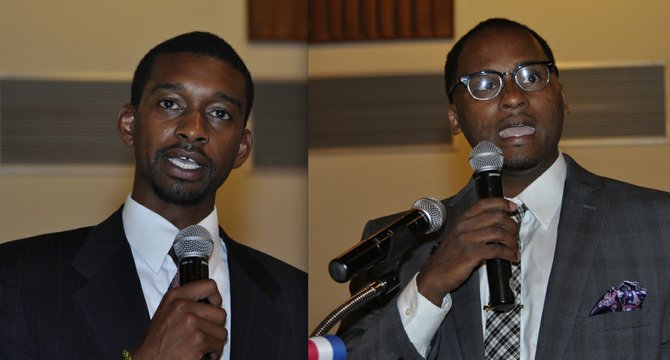 Tyrone Hendrix, a political consultant and strategist, wants to launch a campaign to encourage neighbors to look out for each other by using technology to better connect them.

While everyone was consumed with the Republican primary for U.S. Senate, Ward 6 voters are deciding who will represent them on the Jackson City Council on Tuesday, July 1.

Upon Tony Yarber's election as mayor, his seat on the city council representing a huge swath of the city's south side—which has served as a launch pad for a number of mayoral hopefuls—opened up and attracted a wide field of candidates that is now whittled down to two men.

Tyrone Hendrix and Dennis Sweet IV, who emerged from the field of eight candidates on June 17 to force a runoff, each boasts strong credentials.

Born in Washington, D.C., Sweet grew up in Chicago and Jackson. The 31-year-old works as an associate at his father's law firm, Sweet & Associates, specializing in civil litigation, civil rights, personal injury, medical malpractice, premises liability and criminal defense. He has practiced law in Mississippi since 2008.

Sweet would like to market south Jackson to development companies and create more educational and training opportunities for residents.

"We have to ensure that there is training for the jobs for the residents of the ward," Sweet said in an interview.

In addition, Sweet has worked as an adjunct professor and volunteer pre-law adviser for Tougaloo College, where he earned a bachelor's degree in 2004.

He received his law degree at Thurgood Marshall School of Law in 2008 and his LL.M. from George Washington University Law School in 2011.

In Jackson, Sweet grew up in the area now known as the Rolling Hills subdivision in southwest Jackson. During his adolescence, he alternated between living there with his father and with his mother in Chicago. He has resided in Ward 6 on Scanlon Drive since October 2013 with his daughter, Sydney.

Tyrone Hendrix, 31, has been deeply involved in local politics for a number of years.

He worked on campaigns for Sen. John Horhn in the Democratic primary, and he worked on Harvey Johnson Jr.'s campaign in both the 2009 runoff and general election for mayor. In 2008, he worked on Barack Obama's presidential campaign.

Hendrix served as the state director for Organizing for America, a grassroots advocacy group affiliated with the Democratic National Committee. He attended Jackson State University, receiving a B.S. in psychology in 2006 and an M.A. in political science in 2008.

The family currently lives in Ward 6 on Holyhill Drive with their children, Farah and Tyrone II.

Ward 6 represents a bit of a campaigning challenge in that most of the ward is residential and lacks opportunities for traditional commercial development, a common theme of candidate stump speeches. However, Sweet and Hendrix are appealing to a number of other issues that are near and dear to south Jacksonians.

For example, as the men have campaigned, many residents have grumbled about the crime rate in the ward. Even with the city's crime rate for major crimes going down in the last two years, Ward 6 occasionally sees spikes in violent and property crime.

Hendrix has spoken about the need to strengthen the relationship between neighborhood and apartment crime watch groups and the Jackson Police Department. His "All Eyes on the Streets. All Ears to the Ground" campaign encourages neighbors to look out for each other by using technology to better connect them.

He also said he would like to provide more resources for community and youth organizations and identify areas within the ward that need better lighting to deter criminal activity.

For his part, Sweet said that he would prefer to look at procedures to tear down dilapidated houses and buildings to rid the area of people who may be squatting in the structures. He also said providing more economic-development and job opportunities to the ward will help prevent those who resort to criminal activity to survive.

Sweet also advocates for providing more extracurricular activities as well as ensuring more educational opportunities for kids, which he says will make students excited to go to school.

The city and ward's infrastructure has also been a hot topic at recent candidate forums.

Hendrix has said that he wants to "stop the quick fixes" for the area's potholes. He says he will help find funding for more advanced technology that will provide more permanent fixes for the streets.

"We've seen our roads deteriorate into, really, just crumbling pieces," Hendrix said in an interview. "On a lot of our streets, we can pick up the pavement with or hands, and that's just not something that south Jackson residents deserve."

Sweet said he would like to meet with local developers to find out their plans for the ward and then integrate those plans into future plans for the area's infrastructure. He also promised to bring infrastructure issues to the attention of department heads and hold them accountable.

The runoff election will be held Tuesday, July 1.

As a resident of Ward 6, and after hearing both candidates speak at a recent forum, I feel confident that we can't go wrong with either candidate. I'm supporting Hendrix because his passion resonates with me but I will not cringe if Sweet wins. Both are young and energetic & that's what we need in terms of representation.

I'm also supporting Tyrone Hendrix. I had the opportunity to sit down with him and ask specific questions as it relates to Ward 6 and the City as a whole. He has a very firm grasp of issues and knowledge of the workings within the City. Those qualities will definitely prove beneficial and help the learning curve when he is elected. On Tuesday, July 1, Vote Hendrix for Ward 6!

One more time, I too support HENDRIX. Two years ago, Tyrone Hendrix was in line voting in the mayor's race, and I turned and hugged him and said, "When you decide to run for office we will walk the streets for you." He grew up (middle school and up) next door to me. I saw him introduce Congressman James E. Clyburn in 2008 on State Street and I knew instantly Tyrone was speaking from his gut. He tried sales in high school. But, he found a niche in politics during his college years. I am attending my uncles 81st birthday party this evening. Tomorrow, I will be walking the streets trying to persuade voters to get on Tyrone's wagon.

VOTE Tuesday JULY 1ST for HENDRIX SO WE CALL TYRONE!

While I don't live in south Jackson anymore (haven't done so since 1997), it's vital that a rebirth happens there. I've never met either of the candidates, but from what I'm reading, you can't go wrong with either one. Jackson has been blessed with a wealth of good candidates from the recent mayoral race to, now, the Ward 6 race.

I am supporting Sweet. Jackson has the potential of becoming one of the premiere cities of the South, and Ward 6--which is entirely in South Jackson--is the pulse of the city.

Sweet has the experience of interpreting policy and contracts that will ensure fair business dealings for Ward 6. He also has experience with networking with business owners, who we desperately needed to give deserving Ward 6 residents economic opportunities right in their own neighborhood.

I am so excited that someone with his track record wants to represent Ward 6!