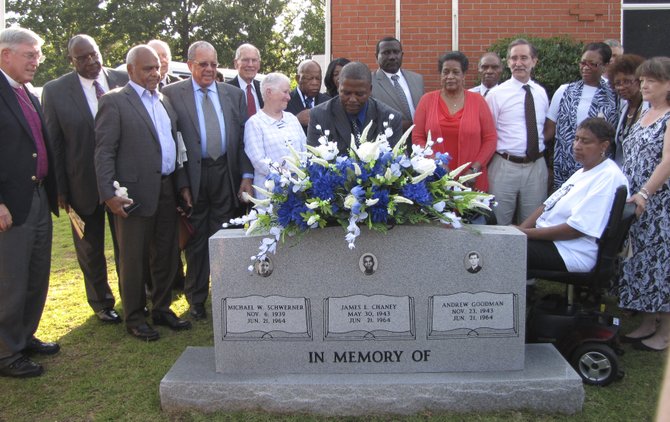 Architects of Freedom Summer, religious leaders and family members of the murdered men gathered at Mt. Zion in Philadelphia on June 14 to honor them.

Philadelphia, Miss.—David Goodman was a teenager in New York City when his brother Andrew and two young civil rights workers disappeared in this small town in Neshoba County. On Saturday, June 14, a day before attending a 50-year anniversary ceremony in their honor, Goodman drove the deserted country road, south of Philadelphia, where the trio died.

The tour brought him back 50 years, to the evening when city police arrested Andrew Goodman, James Chaney and Michael Schwerner, held them in jail without phone calls and then ordered them to leave town after they drove up from Meridian to investigate the Klan burning of Mt. Zion Methodist Church, out in the county east of town. A group of Ku Klux Klan members, including law enforcement, kidnapped and then murdered them on Rock Cut Road, then took their bodies west of town and buried them beneath a dam that was under construction. Their bodies were not found for 44 days, after an informant tipped off the FBI to their location.

"I was 17 when they were taken from us," Goodman, 68, recalled on Sunday night, attending an emotional memorial service at the church filled with pleas to improve education in Mississippi and the nation. "I never understood that somebody could be killed because they wanted to vote."

Goodman has made it his personal mission to make sure painful lessons from the past and his brother's sacrifice are never lost or forgotten.

He now runs the Andrew Goodman Foundation, which helps young people get involved in social justice by placing them with organizations tailored to their personal interests.

Andrew was only 20 when he came to Mississippi the day before he was killed in 1964. Schwerner, a New Yorker, was already working with Chaney, a black activist from Meridian, to run a Freedom School in Meridian, where black people could, among other things, study for the literacy test that whites were using to keep them from registering to vote.

Goodman had trained in Oxford, Ohio, among other volunteers to take part in Mississippi Freedom Summer, a massive drive to set up Freedom Schools and register black people to vote, designed in no small part to bring national attention to what was happening to African Americans in Mississippi. The influx of young idealists from across the U.S did not sit well with most white Mississippians, many of whom supported efforts to reestablish the Klan in 1964 to deal with the summer "invasion."

On Sunday, family members of all three slain men joined fellow civil-rights leaders and members of the community inside the rebuilt church Mt. Zion for the commemorative service, organized by Pastor Peggy Gibson. They called for better education as a key to lifting Mississippi out of its dark past.

Goodman expressed appreciation for the people of Philadelphia and their efforts to do the same. "I've been here quite a few times," he said. "This is a little church in rural Mississippi, and it's so sophisticated how they put it together (the ceremony). This is sacred ground. It's an important memorial to people who were willing to do things."

Gibson has been at Mt. Zion for seven years and said she was humbled by the sacrifice Goodman, Chaney and Schwerner made, which the church commemorates every year on the anniversary of their murders.

"My members say things are a whole lot better. The intimidation was terrible," Gibson said. "For them they see that it has improved a lot, but for me it was going back in time."

After the choir opened the ceremony with "We've Come This Far By Faith," a family member spoke for each of the victims.

"Although these three lives were cut short, their lives were not in vain," said Angela Lewis, daughter of James Chaney. "The only way that any of those lives will have been in vain will be if the work is not continued; if we do not take advantage of the sacrifices that were made for us."

Rita Schwerner-Bender, the widow of Michael Schwerner who was also a Freedom Summer volunteer in Meridian, spoke about the need to keep lessons from the past alive. She called for better funding of the state's schools and noted: "Public education must be a constitutional right. We cannot go back to where we were ... in the 1950s and '60s. Black Mississippians attempted to break the stranglehold, but there is a great deal of work yet to be done." James Young, the first black mayor of Philadelphia, also spoke. "Welcome to a new day in Neshoba County. You don't have to worry about somebody taking you off to jail."

The hundreds of other volunteers who devoted their lives to the civil-rights struggle and are not often recognized for their efforts were also mentioned during the service.

Between hymns and tributes, Gibson presented "Drum Major for Justice" trophies to former Gov. William Winter and former Secretary of State Dick Molpus, a Philadelphia native who has long publicly apologized to the families on behalf of his hometown and the state. The award takes its name from a famous Martin Luther King Jr. quote. Throughout the service, speakers made the point that while Philadelphia may be in a better place today, there is still work to be done half a century later.

"It was very hard for me to come back to this church the first time. I thought about James, Andrew and Michael, and I cried," said U.S. Rep John Lewis, D-Ga., a civil-rights veteran. "These three young men gave their lives, gave their blood. We have a moral obligation, a mission, and a mandate to run to the polls and vote like we never voted before."