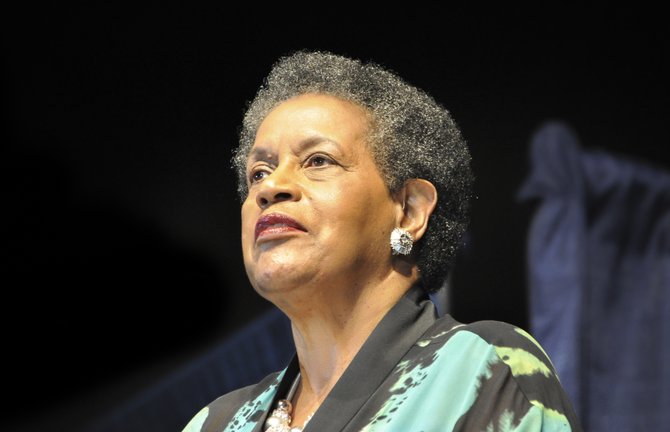 The widow of assassinated civil rights leader Medgar Evers, Myrlie Evers-Williams, stands on her own as a civil-rights activist, while continuing her late husband's legacy.

A Vicksburg native, Evers-Williams began her life-changing journey at Alcorn A&M College—currently known as Alcorn State University—in Lorman, Miss., in 1950. There, she met her future husband, Medgar Evers, who was another honor student at the college. The couple married in December 1951 and began their life's work as civil-rights leaders and activists.

The pair worked to open the first National Association for the Advancement of Colored People state office, based in Jackson, to combat the racial inequality and social and civil injustices against African Americans in Mississippi.

The Evers spent years working tirelessly for the progression of civil and social equality for African Americans. However, Medgar's work came to a halt when Ku Klux Klan member Byron De La Beckwith assassinated him in his own driveway in front of Evers-Williams and the couple's three children.

After grieving and burying her husband, Evers-Williams quickly took up his role in the Civil Rights Movement and fought to bring her husband's killer to justice. Although the prosecution was unsuccessful in two separate trials, a jury eventually convicted Beckwith of the murder nearly 31 years later in 1994.

The following year, Evers-Williams became the national NAACP chairperson and held the position until 1998. During those three years, she completely transformed the organization's image and helped it attain financial stability.

In addition to her advocacy, Evers-Williams wrote several books about her personal experiences, including her autobiography, "Watch Me Fly: What I Learned on the Way to Becoming the Woman I Was Meant to Be," published in 1999. In 2005, she served as editor for Medgar Evers' autobiography, "The Autobiography of Medgar Evers: A Hero's Life and Legacy Revealed Through His Writings, Letters, and Speeches."

Evers-Williams founded the Medgar & Myrlie Evers Institute, which is located in Jackson. The institute promotes integrity, dignity, self-determination, social and economic justice, and the ability to give everyone a political voice. The institute held a ceremony honoring Medgar Evers on the 50th anniversary of his death in June 2013.

A wife, mother, activist and journalist, Evers-Williams has centered her life around helping others and promoting equality for African Americans. Still now, at 81 years old, Evers-Williams continues her exceptional work across the nation.

She is an amazing women. A treasure.