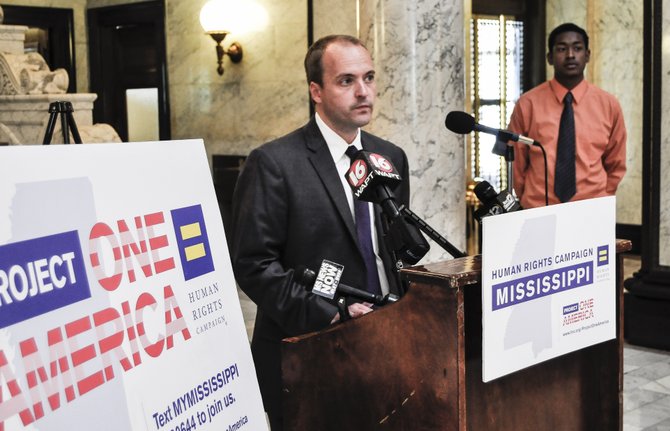 Fifty-seven percent of LGBT people living in Mississippi have called the Magnolia State home for more than 20 years, yet they receive no protection against discrimination in employment or housing or against hate crimes.

This statistic came from results of the largest survey of lesbian, gay, bisexual and transgender people in Mississippi, which the Human Rights Campaign conducted this year and released the results of this morning. The survey included 1,000 LGBT Mississippians to determine the community's needs, experiences and priorities.

"The findings show that LGBT Mississippians are just like their friends and family members: living, working, volunteering and going to church in their communities," said Brad Clark, director of HRC's Project One America.

Hill, who is gay, grew up in Mississippi and has led as the pastor of Broadmeadow United Methodist Church in Jackson for nine years. "No matter what, we are all God's children," Hill said. "Even though we disagree on various issues, our values in the Magnolia state teach us to love everyone."

Clark said that while the United States has made significant progress in securing the rights of LGBT people, those efforts have been "isolated to the coasts and a few bright dots in the middle."

"And we know that you're just as likely to grow up gay or lesbian in Mississippi as you are in New York or California," Clark said.

In Mississippi, an LGBT person can be legally fired because of their sexual orientation. Forty-one percent of LGBT Mississippians have experienced harassment by family members, 23 percent by public servants, 48 percent in public establishments and 22 percent at their churches.

This is why Project One America hopes to "change hearts and minds" of Mississippians and help build a more inclusive society "from the church pew to the workplace," Clark said.

Fifty-three percent of LGBT Mississippians volunteer in their communities, nearly one-half are of faith and more than one-half are in committed relationships. Mississippi also has the highest percentage of LGBT people raising children than in any other state.

Yet, unlike in New York and California, LGBT couples in Mississippi do not have the ability to legally adopt children together. HRC will soon open an office in Jackson to work towards legal protections and equal rights for LGBT people.

"Mississippi is a great place to live, and every person, regardless of who they are and whom they love, deserves to enjoy the place they call home, because this is our home," Hill said.