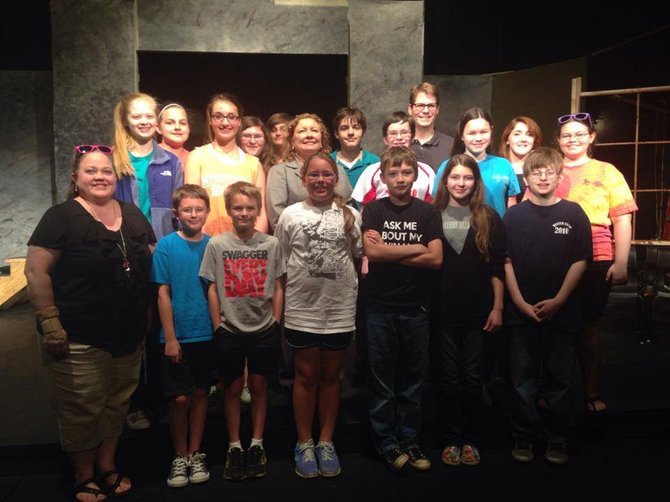 Marianne Hause began on the stage of the Black Rose Theatre (103 Black St., Brandon) two years ago in the production of "Our Town." Hause, who recently relocated to the Jackson area from Hattiesburg, says the Black Rose Theatre Company welcomed her and her ideas—a different experience compared to other theater groups.

"It's a very 'family' atmosphere. People are very friendly, and they want to be very inclusive," Hause says. "They welcome new actors and new blood, if you will, into the community."

Now, she is directing her one-act play, "Spin Cycle," as part of the theater's annual "A Night of One Acts," which features work by a number of local playwrights, directors and actors.

Four plays, including "Her, Him" by writer-director Kris Vick, a Black Rose Youth Theatre Ensemble performance of Marshal Ramsey's "Banjo's Dream," and Hause's play, make up this year's production.

The productions take events—such as a teenager making a video about washing his clothes ("Spin Cycle") and a surprise party gone wrong—beyond the realm of everyday occurrences, and ascend to the status of art. All display a high level of creativity.

Hause says "A Night of One Acts" is a showcase. "It's good to know that there is local talent out there: good writers, good actors, good directing," she says. "People may not know that in little Brandon there is such talent in the surrounding areas."

Hause, who works at Viking Investments in Jackson, has been involved in different facets of other Black Rose shows, including operating the lighting and sound for this summer's musical "Nunsense" and playing the role of "adult" Rebecca in last year's one-act production "Your Biggest Fan" by local playwrights Whitney Lott and director Beth Alexander.

"Black Rose understands that there are creative people in the area who write," Hause says. " ... I think it's important that the community participates in the arts."

Keni Bounds and Eric Riggs return to "A Night of One Acts" this year as the writers and directors of the comedy "Surprise!"

Bounds and Riggs, both Brandon residents, write, direct, act and produce productions for their company, Detectives Dinner Comedy Theatre that was started in 2010. The troupe performs in various venues, including country clubs, casinos, people's dining rooms and restaurants such as Char. Their one-act last year, "The Date," was also a comedy and their first experience at Black Rose.

While "A Night of One Acts" displays the talents of local theater enthusiasts, the production is not the only time Black Rose focuses on its community. The theater relies on donations from local patrons and volunteers for every position, including actors, crew members, directors, producers, stage managers and board members, to fuel theatrical productions.