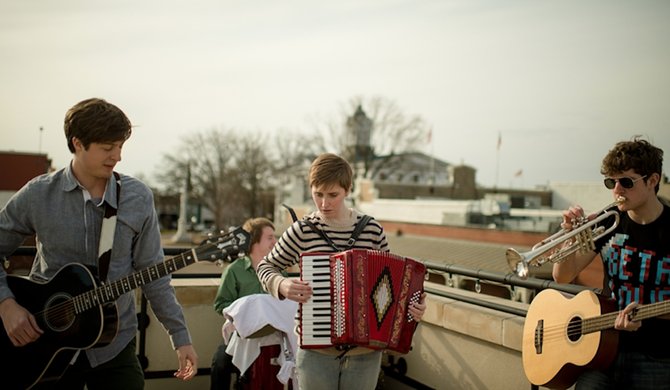 After only playing live since 2012, The Red Thangs released their self-titled debut album June 20.

The Red Thangs have noticed a few more people singing along at shows lately. The Oxford, Miss.-based indie-rock/pop band released its self-titled debut album on June 16, which is available on Google Play, Pandora and Spotify, as well as the band's Bandcamp account.

"We have people singing along at the shows for the first time because they can listen to the songs repeatedly and have the chance to actually learn the lyrics," Ray says. "That part is great because when you're playing live, you're drawing on the energy the audience is giving you, and it's gratifying to see that they're as engaged and interested as you are in the songs."

Having played together since late 2012, The Red Thangs recorded the album when the members felt they finally had enough material. "It's kind of the logical next step to go to," Ray says. "We booked some studio slots with Andrew Ratcliffe at Tweed Recording here in Oxford, which is a great little studio, kind of beneath the radar."

Charles Adcock, who also sings and plays bass and guitar, says the fans have been waiting for something to listen to for a while. "Hopefully, they'll come to shows now with a preview," the 22-year-old says.

The Red Thangs recorded the album in three weeks. Because most of the band's career has been focused on live performances, Ray says the band worked to give the album a similar feel.

During recording, Blair Bingham, one of The Red Thangs' vocalists and the band's ukulele and keyboard player, says the band members, including drummer Drew "Sunshine" Shetley, 24, spent plenty of time together, which has helped their connection and their music. She says the process of breaking their songs down and playing them over and over has improved the band musically.

"It's nice to have something physical to give to people rather than just word of mouth," Bingham, 22, says. "Hopefully, we've proved ourselves."

Not only has The Red Thangs' studio time improved the band's musicality, but the band was able to experiment while recording its album. "Being in the studio, there's a lot of fun musical toys that you get to play around with that might otherwise would not be usable, useful or accessible," Ray says. "We got to try a lot of new things that previously we would have never been able to do."

After releasing the album, The Red Thangs had a week-long regional tour with shows throughout Mississippi, Alabama and Tennessee. The band is setting up a similar tour for the near future.

"Right now, we're just trying to play shows in as many new places as possible and get the word out to everyone we can about the band and about the album," Ray says.

Overall, the band says it has received positive feedback as a result of the recordings. "It's good to know that people actually enjoy this, that we spent all this time working on it and that people can actually get pleasure from it," Ray says. "We honestly feel like the album speaks for itself."