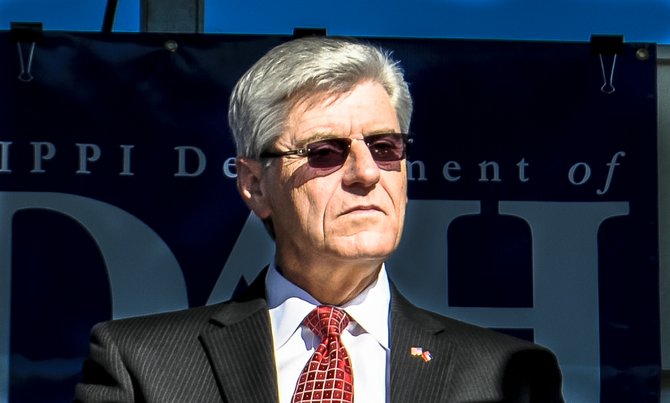 Random screenings of people applying for Temporary Assistance for Needy Families benefits is one of the keystones of Gov. Phil Bryant's legislative agenda. Photo by Trip Burns.

The biggest fight of the young legislative session ended last night with the approval of a bill that would require random screenings of people applying for Temporary Assistance for Needy Families benefits.

It's one of the keystones of Gov. Phil Bryant's legislative agenda. The House debated the bill for four hours before it passed 74-46 just after 6 p.m. The House Public Health Committee had considered the bill earlier in the week. The chairman of that committee, Rep. Sam Mims, R-McComb, sponsored the bill and characterized it as a way to help people get drug treatment.

A federal judge recently struck down a similar measure in Florida while Utah's law remains in place. Asked repeatedly about the scope of drug use among people on TANF in Mississippi, Mims said he did not have information about how big the problem is.

Mims told members that his proposal is different from the Florida law, which made drug-testing mandatory for all applicants without screening them with a questionnaire. Mims said TANF benefits in Mississippi would be paid during treatment but would be cut off for the family if the parent tests positive for drug use at the end of treatment.

Most Democrats objected and proposed a number of amendments, including several to drug test recipients of other types of state benefits, such as college scholarships. Rep. Adrienne Wooten, D-Jackson, put forth an amendment to test members of the Legislature at legislators' expense.

"It's only fair; it's only right," Wooten said.

The Mississippi Department of Human Services annual report says that for the 2013 budget year, which ended June 30, the average monthly payment to a family receiving TANF was $140, while the average payment to an individual was $67. The report said that in June, 9,563 families received TANF payments.

Utah started a drug-testing program for welfare recipients in 2012. A state agency found that the state spent $30,000 the first year and found 12 people who tested positive for drug use. Bryant said he believes Mississippi would run a program for a similar amount of money.

Rep. Steve Holland, D-Plantersville, the former Public Health chairman, called it a "kick in the teeth" to a relatively small number of Mississippians working hard to better their lives.

"I challenge you to get outside your Southern comfort zone," and defeat the bill, Holland told his House colleagues.

Before it passed, David Myers, D-McComb, called it simply a waste of taxpayer money.

Well, here we go again with a useless trick aimed at punishing the poor. This will only cost tax payers money and the chance of identifying a drug abuser will be rare. Will our state law-makers ever learn anything from the HISTORY of others?

It is hard, if not impossible, to believe that this Gov. could be concerned about the welfare of a poor person needing drug treatment. This is a Gov. who will not expand Medicaid, will not fully fund education for public schools and has done everything to keep MS in our place of being at the bottom of everything good and the top of everything bad. I hate to keep saying that; however, everytime I began to think that we are moving in a positive direction, another cruel bill is passed.

We MUST do better!

Of course, they would all pass. Snort.

According to this new law, a TANF applicant, who is "possibly" drug addicted, will be given a two month drug treatment program. If the person continues drug use post treatment, their benefits will be cut.

It rings loud and clear that an addictionologist or a trained alcohol/drug therapist was not consulted about best practice and the scope of treatment for a drug abuser before this law was passed. We have moved far from the teachings of Nancy Regan - "JUST SAY NO." We know that drug addiction is a disease and we must treat, treat, treat and treat.

One condition that will ensure relapse is the patient's fear that they will lose their benefits after one (1) attempt at treatment.

I love the fact that I live in a state where all of out problems have been solved and we're headed to the promised land of 49th place. And I know that because our governor, who loves Jesus way more than you do by the way, has time to focus his attention on something like this. "It'll make better mommy's and daddy's" they say. Yeah, excellent point, cannot believe other states haven't fallen all over that logic. Everyone knows drug addicts would never put their own needs over the welfare of others so they'll probably all be sober within the month. Of course, there are some people who, while they may not love Jesus as much as Phil does, may see things differently. They may see a man who cannot overcome his addiction and is now without any means to help his family doing something drastic. "Like what?" Phil says from behind his Bible in an uninterested tone Well, like getting a gun out and robbing someone who did pass the test or god forbid.... someone with more money. Two things I'm sure of is addicts are going to get drugs and people are going to eat and if it takes giving out small checks every month to keep them from trying to take it from me then I'm all for it.

But... no one's interested in a better economy or jobs or silly materialistic things like that. No Phil and his boys already have all that licked so they're able to focus on the big issues, the ones that will lead us up from the bottom. Things like abortion, prayer in schools, and of course the always popular, making sure those lazy blacks can't get our hard earned tax dollars unless they're at least on the 8th step of "The Program". Nothing gets you reelected faster than religion and racism in this state that's for damned sure.

You know, after awhile you have to stop and think that maybe the rest of the world is right and we're the ones that are wrong. Maybe we're not misunderstood and maybe national news crews don't try to find the most ignorant person to interview when they come to Mississippi.

You're dead on the money justjess! If only we could get those whose lives are most directly impacted by this government's latest ruthless legislative attempt to keep them at a disadvantage to pay attention to what's really happening here. Perhaps more of them would realize the importance of VOTING! This is just one more attempt to undermine the current President's efforts to uplift people out of poverty. These legislators and this governor could give less than a damn about helping into recovery any poor, underprivileged person struggling with addiction. In fact, the truth is that they'd really rather see them stay in addiction so that they can find a reason to arrest them and place them in the prison pipeline. Mark my words, their next stunt will be to pass legislation to charge these people with a drug crime which comes with all sorts of devastating lifelong ramifications. We, The People put this Republican governor and these legislators in office, so we are the ones who have to kick them out!

It's time for all of us to wake up and stop giving lip service, complaining, throwing our hard earned money away on designer clothing & sneakers, etc. which only enriches the very CEO's that these lawmakers are working for. Turn the TV's off for a while, take the electronic devices from the hands of your suffering innocent little children and teach them to care about their futures and that voting is mandatory.

Mid-Term Elections will be held soon. We should all run to those voting booths as quickly as possible. As, this may be our last opportunity to shake out those narrow-minded, hateful bigots and replace them with individuals who actually care about "The People", ALL people!!! Don't just go out and vote just for the sake of voting. Take the time to research these politicians' histories. Look at their backgrounds and discover who they truly are and what they're REALLY all about. You might be surprised! We can't depend upon these phony campaign ads and slogans that are devised to throw us off track and convince us that they have some special sincere interest in our well-being, when that's often farthest from the truth. Know who you're voting for.

Although most of these unfair laws are aimed at African Americans, the fact of the matter is whether you're Black, Brown or Caucasian, if you're poor they throw you all in the same old dirty trick bag and that will never change until We, The People change it. This good old boys network is scared to death of this country's progression. They're deathly afraid of losing that power and control that they've held for centuries. Get them out of there!!! Remember People, this is the same Mississippi Republican Establishment that is refusing to expand Medicaid in your state which will actually ends up saving taxpayer's millions. That alone should speak volumes! WAKE UP POOR PEOPLE & RECOGNIZE YOUR POWER! You hold your fate in your own hands. Think about the next generation.

@Nanapresse "Get them out of there"

I agree. The only way to change the status quo is to remove the status quo: The only way to do this is through the VOTE. The question is, what is it going to take to get more Mississippians out to the polls? What is it going to take to have poor and also middle class whites understand that these laws, i.e., non expansion of Medicaid, not fully funding education, not paying teachers a fair salary, have a negative impact on them, also.

We must keep talking and making people aware of what is going on and that very simple thing they can do ----VOTE!

"Nothing gets you reelected faster than religion and racism in this state that's for damned sure."

I laughed after reading this! Bad thing is, it's true.