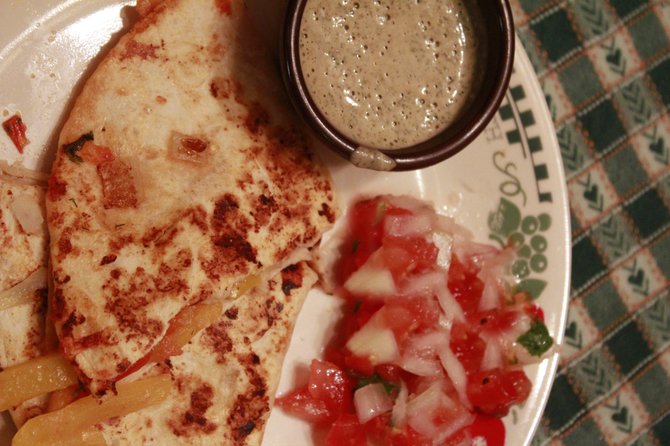 I decided a couple weeks ago to give up on veggie sandwiches. They're just not as filling as turkey or ham or roast beef and, basically, it's a salad between slices of bread. If I want a salad, I'll eat a salad. If I want a sandwich, I'll eat a grilled cheese or peanut butter and jelly. But the one type of "sandwich" that lends itself well to almost any ingredient or lifestyle is a quesadilla.

The preparation time on this meal is probably about an hour. The key is to prep in advance. So the night before, if you're making lunch for the next day, add a few more minutes to your cook time and make the ranch and pico.

Combine the 1/2 cups of onion and tomato in a small bowl. Sprinkle a little salt and pepper and then squeeze half a lime over the mixture. Add in the teaspoon of cilantro and mix. To get the best flavor, cover it and let it marinate in the refrigerator for a little while.

It's easy to go to the grocery store and grab a pack of ranch seasoning, but if you ever looked at the back of one, you're likely to see monosodium glutamate, aka MSG. To get the best ranch without harsh chemicals, I've found it's much easier to make the dressing  from scratch.

Combine the ingredients in a blender pitcher and blend until smooth. Don't go too long, though, because you'll have a liquid-y ranch. If you feel it's not thick enough, try adding a little more mayo.

Heat a pan over medium high heat and add the olive oil. Add the vegetables, sprinkle salt and pepper over them, and squeeze half a lime into the pan. Stir the ingredients around until the onions are translucent, and the tomatoes and bell peppers are soft. Once the vegetables are completely sauteed, let them drain on a paper-towel-lined plate.

Wash the pan out (or get one that fits the tortillas) and place it back over medium heat. Add vegetable oil and throw a tortilla into the pan.  Combine the vegetables and cheese and put them on one side of the tortilla. Fold it in half, encasing your ingredients. Flip halfway through cooking. Your quesadilla is done with the tortilla is crunchy and slightly browned.

This recipe continues our Wellness month feature on healthy vegetarian meals, which began in issue 17.