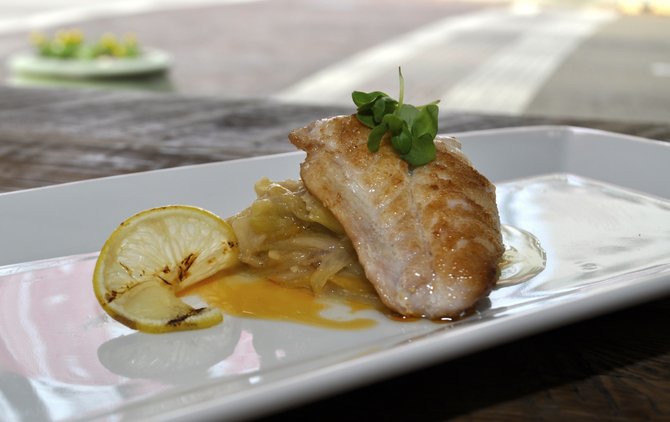 La Finestra serves Italian classics as well as more adventurous specials, such as sautéed sheepshead (a type of fish) with braised leeks. Photo by Trip Burns.

La Finestra is Tom Ramsey’s first foray into the culinary world as owner and head chef.

Chef Tom Ramsey's first restaurant venture could have been a burger joint, but, thanks to a judicious son, he went in for an Italian restaurant in the Plaza Building at 120 N. Congress St. After a whirlwind few weeks of scrupulous culinary research, Ramsey, 48, devised the restaurant concept and menu for La Finestra.

"The whole idea was to do a place that is affordable, because Italian food really should be affordable," Ramsey says. At lunch, most dishes are around $10, with pasta bowls for $8. Dinner prices range from $7 appetizers to a $32 porcini-cured steak.

He made two tenets that the restaurant would live by: a reasonably priced menu and pasta from scratch. "Those are the two things that drove the whole idea," Ramsey says. "A menu under $30 and handmade pasta."

So begins La Finestra, Ramsey's first restaurant, which opened its doors in November. It gets its name—a translation from Italian meaning "the window"—from the floor-to-ceiling windows that line the entire dining area.

Ramsey, a Vicksburg native, has been involved in the Jackson food scene the past five years, following a change in profession. After years of working as an investment banker and lobbyist, Ramsey traded in the suit for a chef's apron—a shift that has been a natural and long-awaited transition for the chef.

"I've been cooking as long as I can remember," says Ramsey, who has also written for the Jackson Free Press and BOOM Jackson magazine. "When I was a kid, my parents bought me this Better Homes and Gardens children's cookbook, and I cooked all the way through it. I've been cooking since I could reach the knobs, but professionally, it's only been about five years."

Ramsey has committed himself to honing his craft, and his attention to detail really shines through in his dinner menu at La Finestra. It's separated into four classic Italian courses: spuntini (a plate of small appetizers), antipasta (a second course that never contains pasta), pasta and secondi (a close equivalent to a main entree, usually a meat or fish).

In addition to recognizably classic Italian dishes such as chicken Parmesan and lasagna, La Finestra's dinner menu features small courses of daily soups and cured Italian meats (salumi) as appetizers, as well as a Mediterranean-style flat iron steak and catch of the day. The lunch menu is more casual, including soup, salad, sandwich and pasta-bowl options that are designed for quick service without sacrificing the "made from scratch" mentality of the restaurant.

"My favorite dish is our ravioli carbonara," Ramsey says. "It has an egg yolk in the center. We make a little chimney out of ricotta cheese, then we drop a raw egg yolk in that chimney and cover it with a second layer of dough. When you cook it, the pasta dough cooks, the ricotta cheese gets really nice and hot, but it doesn't get hot enough to where it cooks the egg yolk, keeping the center runny."

Ramsey says he is dedicated to excellent ingredients and preparation.

"We use great ingredients, treat them with care, and let the ingredients shine through and speak for themselves," he says.

"It's about ingredients and technique, not about overwrought dishes with lots of moves on the plate. A lot of Italian cooking is about restraint, and letting the ingredients do what they do."

Ramsey's passion for Italian cuisine bleeds over into other aspects of the country's culture. You can see black-and-white photos of Italian race car drivers on the walls, and he plans to have Italian-themed outdoor movie showings and street fairs in the spring (taking inspiration from the Italian film "Cinema Paradiso").

The downtown location appeals to Ramsey, who says he hopes to be a part of growing the culture, economy and nightlife there.