The Sex, Drugs and Wolves of Wall Street 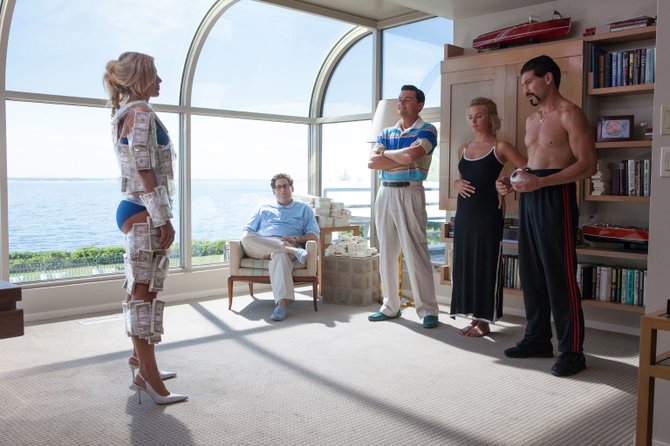 “The Wolf of Wall Street,” starring Leonardo DiCaprio (center) and Jonah Hill (seated), is a maniacal roller coaster of excess.

"The Wolf of Wall Street" shows us the world through Jordan Belfort's point of view, spotlighting the nowhere-to-hide, true evil in Belfort, a man without a conscious. Leonardo DiCaprio plays Belfort, based on a real stockbroker who served time for a massive securities scheme. He tells us how he plans to cleverly lure hard-earned income from his middle-class clients, knowing full well they will likely end up losing their money. "The real question is this: Was all this legal?" Belfort says, addressing the audience directly. "Absolutely not."

The first dose of bizarre hits immediately, with an opening scene including little people and a human dartboard—mind you, this is taking place during the height of a workday. We then jump back to 1987 to see a fresh-faced and almost innocent-looking Belfort step off the bus and grin upward at the NYSE before entering his office building. It's his first day on Wall Street.

Belfort gets canned following the infamous stock bust of Black Monday. His likeable starter wife notices a jobs ad for stockbrokers in Long Island and convinces the skeptical Belfort to inquire. He finds unconventional traders working in a strip mall, pushing penny stocks with a massively marked-up 50 percent commission. Smooth-talker Belfort is hired on the spot.

Enter Donnie Azoff (Jonah Hill), a cheesy guy wearing horn-rimmed glasses and a multicolored pastel button down. "How much money do you make?" he rudely asks Belfort. Next thing you know, Donnie quits his job to join Belfort. The two start the legitimate-sounding Stratton Oakmont, Inc. in an abandoned auto shop and begin recruiting childhood friends as their penny stock-pushing salesmen.

Now a substance enters the picture. Cinematically, it could almost be considered a character due to its extensive time on screen. Drugs. More specifically, marijuana, cocaine, crack and the little-known Quaalude. It's all downhill from here, morally and ethically speaking.

What follows is an indescribable hour and a half of out-of-control scenes showcasing belligerent behavior, limitless drug use and narcissism to the nth degree. Fast cars, women, Hamptons house party, Vegas bachelor party, women, luxury yachts, Swiss banks and, you guessed it, women—it's the excessive Wall Street mentality at its finest. It's truly unlike anything I have ever seen, so without further spoiling, I leave it to you to find out the details.

If watching such things unsettles you, I advise you not to see this movie. On the other hand, it is just a movie, and a mighty fine one at that. Legendary director Martin Scorsese ("Goodfellas," "Casino," and "The Departed") leaves nothing on the table.

Controversy abounds about whether the film promotes the debaucherous behavior on screen. I think that's ludicrous. Is the movie over the top? Absolutely—but, in the end, this is a scathing satire of greed.

So far, "The Wolf of Wall Street" is gobbling up award nominations across the spectrum and should garner several Oscar nominations. At three hours in running time, it is about 20 minutes too long. However, in this duration, "Wolf" sets the all-time F-bomb record with 506 of the four-letter words.

"Wolf" is one of my top three favorite films of 2013. It is a modern-day maniacal masterpiece, but it's not for the faint of heart. Brace yourself, and enjoy.