Thousands Waiting for Medicaid Coverage Are Stuck in Limbo 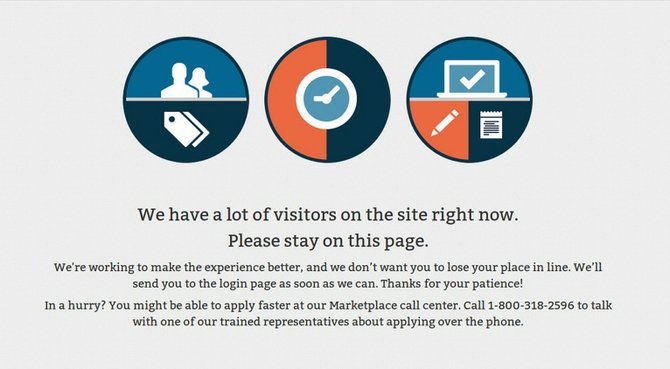 In five states alone—Florida, Texas, Illinois, South Carolina and Arizona—about 104,000 people are still waiting to get enrolled in the public programs after trying to sign up through healthcare.gov, according to state officials and advocacy groups.

For years, Obama administration officials talked about how the health law's online marketplaces would offer a seamless shopping experience for consumers looking for health coverage.

But that's turned out to be an empty promise for many low-income people who went to healthcare.gov, the federal enrollment portal, and were deemed eligible for Medicaid or the Children's Health Insurance Program (CHIP).

In five states alone—Florida, Texas, Illinois, South Carolina and Arizona—about 104,000 people are still waiting to get enrolled in the public programs after trying to sign up through healthcare.gov, according to state officials and advocacy groups.

The healthcare.gov website used by 36 states has been unable to transfer income and other data from applications to the state agencies that run Medicaid, the state-federal program for low-income adults, and the children's insurance program. As a result, tens of thousands of applicants have been left in limbo—without coverage that was supposed to begin Jan. 1.

State Medicaid officials in Texas, Florida, South Carolina, Arizona and Illinois say they have not been able to enroll anyone in Medicaid or CHIP directly from the healthcare.gov website.

"This is not what we were hoping to see," said Greg Mellowe, policy director for Florida Chain, a consumer advocacy group.

He said the enrollment website was supposed to provide "real-time eligibility," not leave people waiting for weeks to find out their status.

The problem affects states using healthcare.gov regardless of whether they expanded Medicaid eligibility under the health law. Texas, Florida and South Carolina are among the states that chose not to expand the program.

Federal health officials say they are working on the software problems—as they have been since the website's Oct. 1 launch. They say that once people are enrolled in Medicaid, their coverage will be retroactive to Jan. 1. But without confirmation of coverage, many may face problems accessing health services in the interim.

An estimated 9 million people were expected to enroll in Medicaid or CHIP in 2014 under the health law.

The most recent detailed breakout on signups showed that about 803,000 were deemed eligible for the programs as of Nov. 30. A spokeswoman for the Department of Health and Human Services said she did not have an updated figure.

In late December, HHS officials said 3.9 million people were found eligible for the programs, but that total included an unknown number who were already enrolled and were simply renewing for another year.

Consumers were supposed to be able to go to healthcare.gov to find out if they qualified for Medicaid or CHIP, or for subsidies to buy private insurance. If they were deemed eligible for the public programs, their applications would automatically be transmitted to state Medicaid agencies. Some states said they would accept the federal determination and others had planned to follow up with their own checks.

But software problems have hindered the transfer of information from healthcare.gov to states, preventing either scenario from working smoothly.

As a result, state and federal health officials have urged people determined to be eligible for public programs through healthcare.gov to go to their state's Medicaid website to complete their signup. That process means applicants have to repeat answering many of same questions about income, family size and other information.

Unlike applying for private health insurance on healthcare.gov, however, there is no deadline to apply for the public programs.

The problem with healthcare.gov does not affect the 14 states that have their own health insurance websites to handle Obamacare enrollment.

The Obama administration has offered states relying on healthcare.gov the option to receive a computer file on potential Medicaid and CHIP enrollees that they can manually review and then contact applicants. But states have said some of the information is incomplete, and the process is more time-consuming than they had hoped.

John Supra, South Carolina's deputy Medicaid director, said his agency recently began testing a data transfer system with the federal government to receive applicants' data from healthcare.gov. He estimates it could take several weeks to reach everyone who has applied.

"It was supposed to be a seamless and totally automated system for states," Supra said. He said he doesn't know how many started on the healthcare.gov website and then came to the South Carolina's Medicaid enrollment site.

Matt Salo, executive director of the National Association of Medicaid Directors, said states have been struggling to get information from healthcare.gov "in a useable and timely fashion."

He said instead of the much-touted "no wrong door approach," Medicaid officials are telling applicants, "there may be a better door."

Asked why the problem has yet to be fixed, Salo said, "This is complicated stuff we are doing here and more complicated than just building a website."