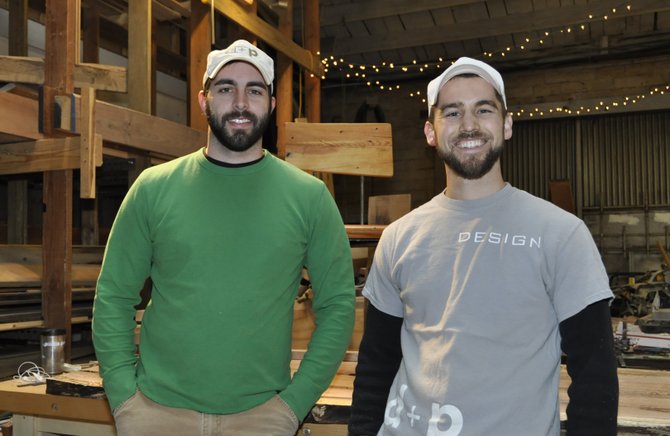 Self-proclaimed "urban loggers" David Dill, 30, and Paul Purser, 29, planned to become architects, but have become so much more. As Purser explains, they are "forging their own architectural path" by harvesting trees from an urban setting and using the scrap wood in creative ways.

Purser grew up in Jackson, Miss., where his grandfather once owned a furniture store on Farish Street. Dill grew up working construction during summers in Jackson, Tenn., and assisting his engineer grandfather, whose hobby was furniture woodworking. The two men connected at Mississippi State University's College of Architecture. After Purser graduated in 2010 and Dill in 2009, the pair found themselves here in Jackson at the height of the economic downturn with little or no prospect of finding entry-level architectural jobs.

Dill served a stint in Uganda with Engineering Ministries International—a nonprofit composed of architects, engineers and design professionals using their skills to improve the lives of impoverished families around the world—and then returned to Jackson where Purser was working on home-repair projects. They worked together often and decided to team up in December 2011 to form their company, d+p Design Build. The two rented a workshop and office space in what was probably an old 1940s soap factory in Jackson's resurgent midtown area.

"Paul and I were already working together on quite a few home-repair and remodel projects before we officially launched the company," Dill says. "We are both architects, space designers, but we knew that we would have to branch out into different directions, be diverse, to make the business work."

That is what they have done in true entrepreneurial style. In addition to remodeling projects and home-planning projects, Dill and Purser are developing a furniture line made from what they call "all real materials," including salvaged woods and metal.

"Trees are amazing," Purser says. "We are typically drawn to local Red Gum, Red Oak and Sassafras slabs, but we have used Maple and Cedar. ...We would like our furniture to really be viewed as art, an heirloom that can be passed down. It is authentic, industrial and responsive."

"Yes, it must last. I think our pieces are thoughtful, modern and intentional, but the quality is also really important," Dill adds.

Buyers are taking notice. The two first sold a pair of handmade prototype chairs on Etsy. They then designed a pair of sturdy outdoor tables and benches out of scrap materials for nearby Rowan Middle School, dubbing the table style "Rowan." Brown Elementary School liked the tables so much that they ordered them as well. Tesla Motors, the electric car maker in California, saw the tables online, and has placed an order.

The pair has been drying a batch of those much-loved Red Oak slabs salvaged from a 100- to 150-year-old tree that fell on a house on nearby West Street in the wood kiln for months. The slabs will become the tabletops in the cafe for the soon-to-open Whole Foods in Highland Village. "The folks from Whole Foods came in to tour the workshop and were curious about the tall stack of slabs they saw," Dill says.

Both Dill and Purser are spiritual and believe wholeheartedly in supporting worthy organizations and charities. They have donated a Heart Pine and steel coffee table to 200 Million Flowers, an organization that supports adoption, for their upcoming fundraiser.

"We would really like to make donating to charities a regular part of our business," Purser says. "We hope in the future to donate part of each sale to a worthy cause."

The architectural path for Dill and Purser continues as they move their furniture from prototype pieces to a production line.

"We are focusing on ways to produce more pieces with the same aesthetic and quality, while keeping costs low," Purser says.