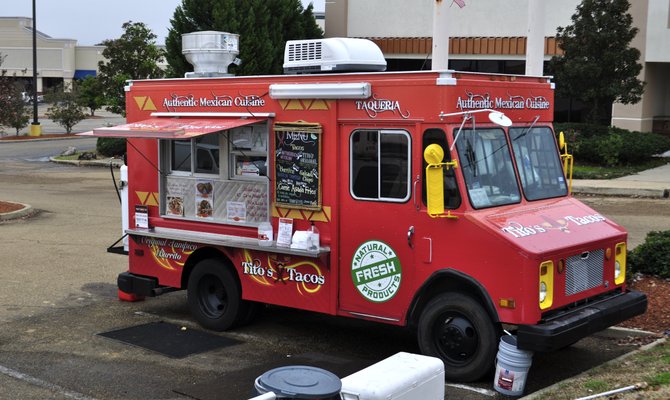 Tito Gutierrez is his name. Tacos are his game. The 33-year-old entrepreneur and Mississippi Air National Guard pilot is the owner of Tito's Taco's, Jackson's best Mexican restaurant on wheels. Since opening Oct. 7, 2013, Tito's Tacos has received a steady stream of food lovers at the truck's permanent location in a parking lot on the Jackson side of County Line Road.

Gutierrez got the inspiration for his truck from the vibrant taco-truck scene in southern California, specifically in San Diego. Although he lived on the opposite coast, his ties to California are strong. "I used to go to L.A. when I was in college," he says. "I was initially accepted to USC (the University of Southern California), checked it out and had a girlfriend who lived out there."

Originally from Panama, Gutierrez moved to the U.S. when he was 18 to attend the University of Central Florida, where he majored in aeronautical science. After serving in the Army as a cook for six years, Gutierrez moved to Mississippi in 2008 to fly C-17s to Iraq and Afghanistan for the Air National Guard. The food truck was his idea to stay busy when his seven-year stint on active duty came to a close in November.

Despite having no experience owning a restaurant, Gutierrez opened the truck with only four months of preparation. He found further information about SoCal food trucks online and called scene leaders numerous times for advice. He bought the truck in Houston and designed the paint job and logo himself.

One of his goals with the food truck is to bring an authentic flavor of Panama, as well as SoCal street tacos, to Mississippi.

"Growing up in Panama, in Central America, the food is a lot different (here), even the Mexican food here is different," he says. Seeing Mississippians embrace the traditional tacos has been exciting for Gutierrez. "The people who are normally eating the American tacos are now starting to eat the authentic."

Gutierrez has also added several original creations to the menu, including the Spanish pulled-pork barbecue taco, Tito's Spicy Sauce (which he makes on the truck), the Carne Asada French Fries and, his personal favorite, the Carne Asada Nachos.

Unlike Lurny D's Grill and Cheesin' For No Reason food trucks, you won't find Tito's switching up its location based on the day's plans. Tito's Tacos stays parked at the same location in north Jackson (from 10 a.m. to 10 p.m. every day except Sunday.

"When I talked to the food truckers (in San Diego), (they said) what has been working is the individuals who are set up in one location full time," Gutierrez says.

The atmosphere at the truck wouldn't be complete without Gutierrez himself serving the food. The ever-smiling chef is often out front of the brightly colored truck, taking orders from people's cars if it's raining and chatting with customers. He says when business gets especially brisk he hops on board to help his staff, but he is usually out front serving the food. "I enjoy more the aspect of interacting with people," he says.

Those people come in all shapes and sizes, and from as far away as Pearl. While I was busy wolfing down my Carne Asada French Fries (which, for $8, was enough food to feed up to three people; smaller portions are $4), I witnessed a young woman inquire in Spanish about the food, a mom and two kids swing by the truck for dinner, and a young businessman contemplating the laminated menu while Gutierrez gave suggestions.

Located at 6390 Ridgewood Road, off County Line Road, the truck is in the perfect location for Jackson commuters heading up Interstate 55 after a long day of work. For extra convenience, you can text your order to 601-273-4545. To inquire about catering, call Tito's Tacos at 662-435-0764.

This will definitely be on my list of places to try when I come home. The truck is parked right in front of the building that had Copeland's and Friday's Tuna in it. If you turn in from Ridgewood Road, watch out for an enormous pothole. Better yet, turn in by where Walgreen's used to be.