Band of the Day: The Beatles 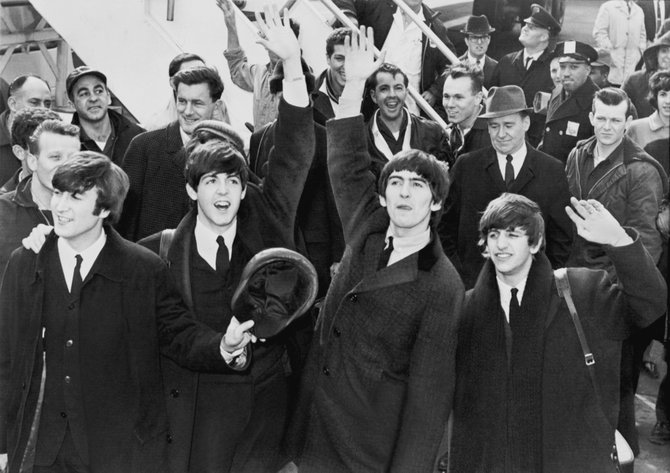 If you were above the age of 5 in 1964, you probably remember the night The Beatles made its first U.S. appearance on the "Ed Sullivan Show."

On Feb. 7 of that year, the band landed at John F. Kennedy Airport in New York City. It performed on the "Ed Sullivan Show" Feb. 9, 1964, with one-third of the U.S. watching.

The band's earnest roots start with 16-year-old John Lennon forming a group with several friends from Quarry Bank School in 1957. Paul McCartney joined the band as a rhythm guitarist in July that year, and then invited George Harrison to watch them practice in 1958. Harrison tried out and became the lead guitarist.

After Lennon's Quarry Bank friends dropped out of the band, he, McCartney, and Harrison began playing together under the name Johnny and the Moondogs, whenever they could find a drummer. Lennon's friend Stuart Sutcliffe, who sold one of his paintings to purchase a bass guitar, joined the band in 1960, and suggested that they change the name to Beatals as a tribute to The Crickets, of which Buddy Holly was a member. The name changed three times before it became The Beatles.

The band went through two changes, with the death of Sutcliffe in 1962, the hiring and firing of Pete Best in 1960 and '62, and then the addition of drummer Ringo Starr, which solidified the final lineup.

Over the next two years, Lennon, McCartney, Harrison and Starr saw immense success in the U.K. In 1964 they brought their fame across the pond. Though The Beatles disbanded in 1969, their legacy has carried on the last 50 years.

The band's connections reach all the way to Mississippi. The Beatles' emergence provided an outlet for the state, a way to escape the recent devastation of the murders of Medgar Evers and President Kennedy. Mississippi went crazy with Beatlemania, according to Marshall Magee said in a USA Today article. (Magee was 17 when the band arrived and saw the craziness up close when he became a DJ at WRBC.) Malcolm White told USA Today that he saw The Beatles on the "Ed Sullivan Show" when he was 12. With the aid of his grandfather, White bought a copy of the band's record "She Loves You."

The story comes full circle, because at the root of The Beatles' music is a blues note. In an interview, the Fab Four often said their influences included Chuck Berry, Little Richard and the Ronettes, who were all part of the blues movement that started in the humble Mississippi Delta. And, had it not been for The Beatles busting open the door to rock 'n' roll, we wouldn't have the wide array of music we have today.