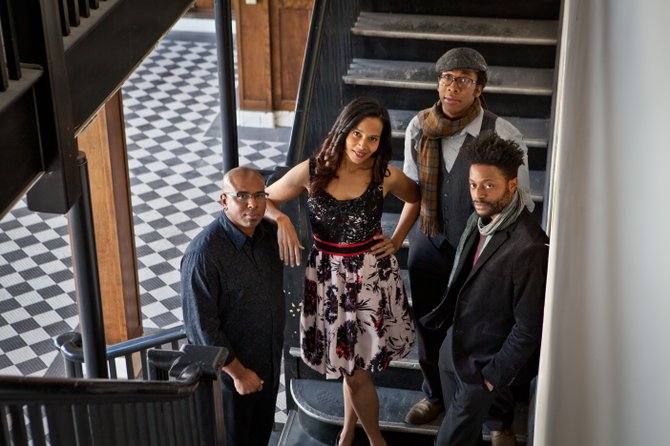 The string-based band, Carolina Chocolate Drops, seeks to highlight the important role that African Americans played in creating this nation’s music more than a century ago and keep that old-time music alive.

A key philosophy that brings the members of Carolina Chocolate Drops together is that the older music—particularly that of black string bands—that shaped what we hear today should not be forgotten.

"When I was asked to join the band, we had a lot of similar philosophies and ideas about music and history," says multi-instrumentalist Hubby Jenkins, who joined the group in 2011. "That's one of the beautiful things about being in this band—being able to tour around and teach people these things and show people these songs, and getting people's initial reaction of seeing African Americans playing the music as well is very important."

The founding members of Carolina Chocolate Drops—Rhiannon Giddens, Dom Flemons and Justin Robinson—formed the group in 2005 as somewhat of a tribute to their musical mentor, Joe Thompson. The trio would spend Thursday nights at Thompson's home in Durham, N.C., learning about old-time music. The black fiddler and songster, who was in his 80s at the time and has since passed away, played using a short bowing style that he passed on to the musicians.

After several line-up changes, the band now consists of Giddens, Jenkins, cellist Malcolm Parson and multi-instrumentalist Rowan Corbett. Each member allows Carolina Chocolate Drops to keep its flexibility due to their range of musical talents and diverse backgrounds.

While growing up, Jenkins, a Brooklyn native, listened to a range of music. He was a fan of hip-hop and R&B, and his family exposed him to everything from Motown to The Talking Heads to traditional Puerto Rican music. "It was after high school that I got into playing bass and listening to more music from the '60s," Jenkins says. During high school, he played saxophone and cello. "I heard Bob Dylan for the first time and Captain Beefheart for the first time—two guys who were really influenced by blues music a lot—and that got me into listening to older blues guys."

Jenkins recalls being astonished when he first saw a Carolina Chocolate Drops performance before he joined the band. "Wow, a black person playing old-time music," he thought to himself. "I was sort of amazed. I'd never seen this before because I grew up in Brooklyn, so it was like a big thing for me."

He has also had similar experiences during which the roles were reversed. After he performed a blues song from famed musician Robert Johnson one night, a man came up to him and said, "I've never seen a black guy play bluegrass before."

"It was a big eye-opener for me," Jenkins says. "I wanted to learn more about the music and continue playing it and, of course, spread it as much as possible."

Since its formation, the group has taken on a larger goal of educating its audience about the history of American music in regards to its African American roots. "There's this whole rich art form, and it's a wholly American art form that was created by African Americans that seems like we're kind of detached from now," Jenkins says about the blues and earlier forms of music in the states.

"Just learning about those sorts of things really opened the door for me to look at America and American music in a totally different way," Jenkins says. "Just imagine: The banjo came from Africa, and it was sort of just a black instrument for almost 100 years or something. Then white people started getting into it, and there was the creation of the first wholly American music that formed out of that."

The commercial success of Carolina Chocolate Drops shows that the public wants to learn and is learning about American music's African American roots. Jenkins believes that people seem more aware of history now than compared to 10 years ago—perhaps due to both the rise bands such as Carolina Chocolate Drops and academic research on music—especially in regards to the banjo or African American contributions to the nation's music.

"We have this wealth of amazing music that shouldn't be forgotten, and it's just as valid and relevant today as when it was created," Jenkins says. "So that's part of the main mission is to just spread that music and to keep that music alive and to educate people about sort of the history of America through the music and teaching people about the relevance that African Americans had at the beginning of the creation of the American music forms and what that means in the historical context and what that means in the musical context. Probably the third (goal) is to just enjoy the music and to let it be a part of you."

Carolina Chocolate Drops will perform at 8 p.m. Feb. 12 at Duling Hall (622 Duling Ave.). Doors open at 7 p.m. Tickets are $15 in advance and $20 at the door, and are available at Babalu Tacos and Tapas, Ticketmaster locations, or by visiting ardenland.net or calling 601-292-7999. Visit carolinachocolatedrops.com.