Kindred: Bringing Soul to the City 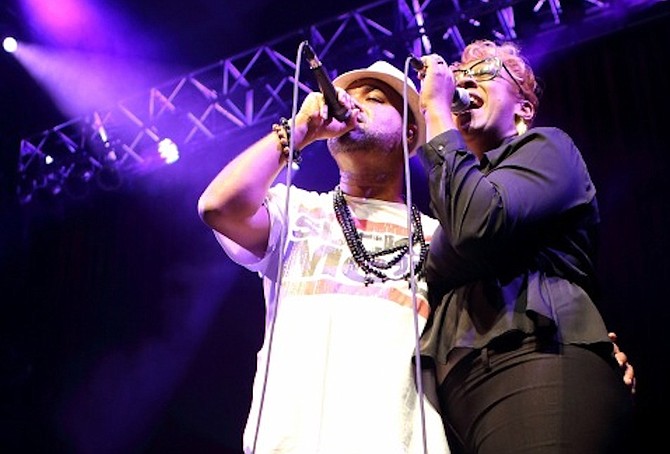 At the Rock and Roll Hall of Fame in Cleveland, Ohio, it's important to know your musical genres. The organization describes soul as "music that arose out of the black experience in America through the transmutation of gospel and rhythm and blues into a form of funky, secular testifying." That description sounds just fine to uplifting neo-soul duo Kindred the Family Soul of Philadelphia, Pa.

Fatin Dantzler and Aja Graydon Dantzler, the powerhouse vocalists of Kindred the Family Soul, perform with Mike Burton and the Good Times Brass Band, and actor and comedian Palmer Williams for the 11th Annual Night of Musical Artistry, Saturday, Dec. 13. While the husband and wife have no Mississippi ties, they hope to gain a few new fans with their performance at Jackson State University's Rose McCoy Stadium.

"We are bringing passion, excitement and energy," Aja says. "We are all about love, hope and understanding, and we hope people understand who we are."

That identity has been in development since their first performance in 1999. Six months later, they began to sing under the moniker Kindred, a word the couple says is synonymous with family and being a unit. The couple added "The Family Soul" to its stage name shortly afterward to trademark it.

The group's hits include "Far Away," "Stars" and "Where Would I Be?" The 2003 debut full-length release, "Surrender to Love," nabbed a Best R&B/Soul Album nomination at the 2004 Soul Train Music Awards. The duo was also nominated for a BET "Cool Like That" award in 2006. Last year, Kindred the Family Soul released "Live from London," an album celebrating the 10th anniversary of "Surrender to Love."

Accolades don't draw fans to Kindred the Family Soul, though. Fatin says he and his wife owe their success in the soul genre to their openness and honesty as artists. "We are who we are, and don't put on a facade," he says.

The couple has been married for 16 years and has six children but still manages to perform and tour regularly. Fatin says it's a matter of "keeping perspective and keeping our priorities in order. Obligations and responsibilities make the music what it is."

For the Dantzlers, it's important that the music is emotional, hopeful and perceptive, characteristics that aren't common in most modern music.

"Our message is to tell our story, to leave a legacy and to be inspirations to our listeners," Fatin says. "We put our hearts and souls into our music. It's all very special to us, like our children, and we want to share that with our listeners."

It's easy to pinpoint inspirations for Kindred the Family Soul's signature sound and themes. For the Dantzlers, self-professed lovers of "good music," the biggest influences share one thing: passion. Whether it's early jazz, '70s funk or '80s hip-hop, an honest message is crucial. You might walk in with no knowledge of Kindred the Family Soul, but the Dantzlers want you to walk out as part of the family.