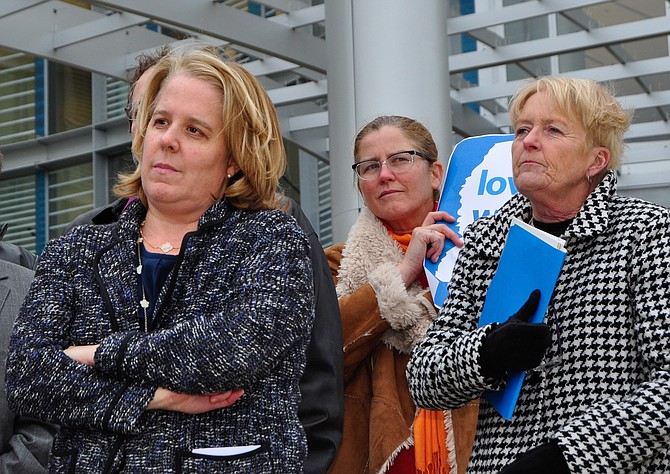 JACKSON, Miss. (AP) — For weeks, Rebecca "Becky" Bickett and her longtime partner Andrea Sanders kept a bag packed with wedding clothes. It stayed in their minivan, Bickett said, so they could get ready on short notice in case a judicial ruling suddenly allowed same-sex couples, like themselves, to marry in Mississippi.

The clothes were nothing fancy, Bickett said. Just the shirts they each wanted to wear, plus a couple of outfits for their toddler twins.

"We had clothes for the kids so they'd look all snazzy," Bickett said in a phone interview from the home that she, Sanders and their 16-month-old sons share in coastal Harrison County.

One day this past week, Bickett took the bag out of the van and brought the clothes into the house to wash, acknowledging it could be a while before she and Sanders can say their vows and pose for their wedding pictures.

Bickett, 34, and Sanders, 32, have been together for a decade and lost a home to Hurricane Katrina in 2005. They are one of two lesbian couples who, along with the gay-rights group Campaign for Southern Equality, sued the state of Mississippi in October to challenge its ban on same-sex marriage. The state has a 1997 law and a 2004 voter-approved constitutional amendment that define marriage as being only between a man and a woman.

U.S. District Judge Carlton Reeves on Nov. 25 overturned the state's ban on same-sex marriage, but put his ruling temporarily on hold to let the state appeal. The 5th U.S. Circuit Court of Appeals extended that hold Thursday, saying same-sex couples won't be allowed to marry in Mississippi while the state continues defending its laws.

On Friday, the 5th Circuit set oral arguments in the Mississippi case for Jan. 9 — the same day that the same three-judge panel in New Orleans will hear arguments over same-sex marriage bans from the other two states in its circuit, Louisiana and Texas.

Reeves agreed with plaintiffs' arguments that the 14th Amendment to the U.S. Constitution, which guarantees equal protection under the law, applies to same-sex couples as well as couples of the opposite sex.

"The Fourteenth Amendment ensures that citizens' rights to liberty and equality are the same whether you live in the Rocky Mountains or the Mississippi Delta," Reeves wrote.

Gay marriage is legal in more than half the states.

Republican Gov. Phil Bryant said this past week that he voted for Mississippi's constitutional amendment 10 years ago and "absolutely" still supports defining marriage as only between a man and a woman.

"God has defined marriage from the dawn of time as the union of one man and one woman, and what God has defined, no man, no judge, can redefine," AFA Tim Wildmon said in a Nov. 26 news release. "This judicial tyranny must be resisted."

Bickett called Mississippi's appeal of Reeves' ruling a waste of public money that she believes could be better spent on programs for people in need, such as children in the foster-care system or people on Medicaid. She said the state is preventing her and Sanders from having rights that come with marriage, including guarantees that they're both legally recognized as parents of their sons and that they would be able to visit each other in the hospital, for example, if one of them is ill.

"This is not a cause to be fought. It is a right we should have," Bickett said.

The other plaintiff couple, Jocelyn "Joce" (JOH'-see) Pritchett and Carla Webb, live in Mississippi's capital city of Jackson and married in Maine in 2013. Under the Mississippi marriage definition that Reeves overturned, and that remains in limbo under appeal, Mississippi does not give legal recognition to same-sex marriages performed in other states.

Pritchett and Webb have a 6-year-old daughter and 2-year-old son. The night of Reeves' ruling, the women and their children danced around their living room, but Pritchett said the joy she and Webb felt was tempered by knowing state officials would appeal.