I Can’t Not Talk About Ferguson 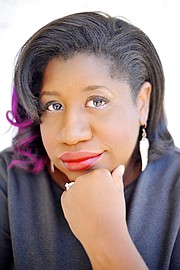 I would like to not talk about Ferguson. I'd like to turn a blind eye and stay in my own world, full of first-mom wonders and worries, diapers and onesies, Sesame Streets & Peg+Cat. But I can't not talk about Ferguson, because the child in my lap, the sweet one that I nurse and nourish, is brown and male just like Michael Brown. I educate him on his extremities, sing sweet ABCs to him, but one day there will come a time that I'll have to educate him on how to live.   No, son, you can't play with water guns that look real in public. You can't run freely in public without looking like you're truly exercising, and even then, you'll need to have ID and be mindful of your wardrobe. Always keep your hands up, and be especially cautious when stopped by the police.

Actually, it will be better for his father to talk to him. I personally saw the highly talented artist and decorated veteran make himself smaller, his speech slower, words deliberate in the presence of a cop while taking photos at sundown on the reservoir.

That officer wore the same Airborne wings that adorned my husband's uniform a few years ago, but there was no brotherhood in his tone as his words angrily spat down on my husband, with heated accusations of trespassing and disobeying a locked gate that wasn't, all the while with his hand on his weapon.

In that moment—full of our seed, a brown male child that we created—I felt angry. I didn't recognize the man he became in that instant, so he could be a father to our son in months. I wanted to scream at the officer: "Can't you see the same divinity that lies in you is in him? Can't you see how beautiful and valuable he is, that his life matters as much as yours, and the life of our son matters like your kids?"   I have to talk about Ferguson because one day, regardless of the many wonderful friends and family we have of different hues and religions, someone will attempt to make him feel small. Someone will point out his difference and associate it with people they feel mirror him. Someone will associate my son with some image seen in the media.

I have to talk to my son because someday his chubby cheeks will flatten and grow hair. His baby babbles and coos will become deep-based vibrations that may strike chords of fear in those around him, and that fear could lead to his death.

It makes me uncomfortable, and it makes me feel helpless, but it's necessary like the air we all breathe. I encourage you to talk about it as well in hopes the next generation can breathe a bit freer, answer questions we refuse to ask and clean up our mistakes wrapped in fears. For they will take care of us in our twilight and hopefully bear a torch into a brighter future.