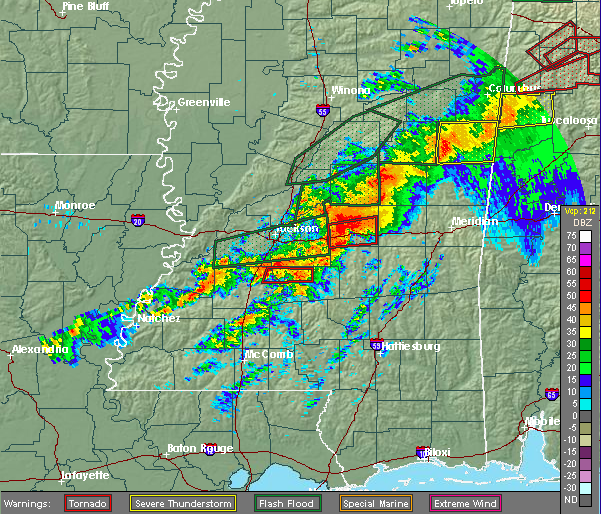 JACKSON — TUPELO, Miss. (AP) — At least three tornados flattened homes and businesses, flipped trucks over on highways and injured an unknown number of people in Mississippi and Alabama on Monday as a massive, dangerous storm system passed over several states in the South, also threatening to unleash severe thunderstorms, damaging hail and flash floods.

People in the path of the huge system were on edge as the National Weather Service posted tornado watches and warnings around Mississippi, Tennessee, Alabama and Georgia. Forecasters said the system is the latest onslaught of severe weather that triggered deadly tornadoes in Arkansas, Oklahoma and Iowa on Sunday, killing at least 18 people.

The storm was so huge it was visible from space, photographed by weather satellites that showed tumultuous clouds arcing across much of the South.

Injuries were reported in Tupelo, a community of about 35,000 in northeastern Mississippi; and in Louisville, the seat of Winston County about 90 miles northeast of Jackson, Miss., where about 6,600 people live, said Mississippi Health Department spokesman Jim Craig. He said the number and seriousness of the injuries were not known because relief efforts were still underway. Television footage showed trucks being flipped over on state roads.

A tornado damaged the Winston Medical Center in Louisville, Miss., said Jack Mazurak, a spokesman for the Jackson-based University of Mississippi Medical Center, which received a trauma patient from the county and was sending personnel to help triage patients on the ground.

Emergency officials said a tornado also touched down in Limestone County, Alabama, Monday, causing widespread damage, but they could not say whether there were injuries or deaths.

Residents and business owners were not the only ones seriously rattled by the tornadoes.

NBC affiliate WTVA-TV chief meteorologist Matt Laubhan in Tupelo, Miss., was reporting live on the severe weather about 3 p.m. when he realized the twister was coming close enough that maybe he and his staff should abandon the television studio.

"This is a tornado ripping through the city of Tupelo as we speak. And this could be deadly," he said in a video widely tweeted and broadcast on YouTube.

Moments later he adds, "A damaging tornado. On the ground. Right now."

The video then showed Laubhan peeking in from the side to see if he was still live on the air before yelling to staff off-camera to get down in the basement.

"Basement, now!" he yelled, before disappearing off camera himself.

Later, the station tweeted, "We are safe here."

Mississippi Gov. Phil Bryant declared a state of emergency Monday in advance of the storms, which sent emergency officials rushing to put plans in place.

In Memphis, Tenn., officials declared a state of emergency in a county southwest of Nashville because of flash flooding. Authorities urged people there to seek higher ground after several homes and some business were flooded in Maury County and school leaders worried that some school buses might not be able to get schoolchildren home over swamped roads.

"If it's unsafe, certainly the drivers are not going to chance it," said Maury County emergency official Mark Blackwood.

More than 50 school systems shut down early in Alabama's northern half as a precaution against having children and workers on the road in buses and cars when the storms arrived. Several cities closed municipal offices early.

The threat of dangerous weather jangled nerves a day after the three-year anniversary of a historic outbreak of more than 60 tornadoes that killed more than 250 people across Alabama on April 27, 2011.

George Grabryan, director of emergency management for Florence and Lauderdale County in northwest Alabama, said 16 shelters opened before storms even moved in and people were calling nervously with questions about the weather.

"There's a lot of sensitivity up here," Grabryan said. "I've got a stack of messages here from people, many of them new to the area, wanting to know where the closest shelters are."

Forecasters said the system moving into Alabama could generate tornadoes with strength ratings of EF-3 or higher and damage tracks 30 miles long or worse.

Elsewhere, forecasters warned Georgia residents of a threat of tornadoes in northern and central counties in coming hours.