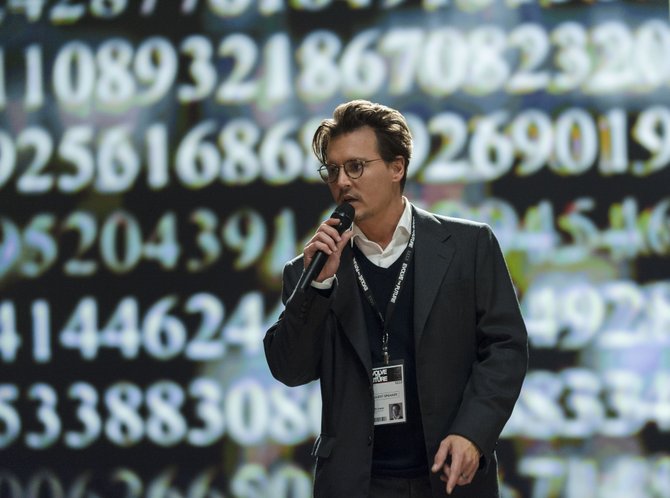 “Transcendence,” starring Johnny Depp, explores what it means to be human.

Academy Award-winning cinematographer Wally Pfister has teamed up with famed director Christopher Nolan for seven films, most notably "Inception," "The Dark Knight" and "The Prestige." Pfister's eye for beauty and intrigue is unmatched in today's cinema, and he now makes his directorial debut with "Transcendence."

This movie, with its futuristic implications, depicts the rapidly growing world of technology and the passionate professionals who drive the field. "Transcendence" is a smart oddity among the vast amount of uninteresting and flat Hollywood releases of today. If you accept the fictional absurdity and stay calm during a few of the plot twists and turns, I promise you will survive it.

As the film begins, we meet Will and Evelyn Caster (Johnny Depp and Rebecca Hall). Not only are the two married, they also work together. Will staples a sheet of perforated copper on top of the backyard arbor. He tells Evelyn it will shield away electronic signals and provide the two of them and their garden with sanctuary from technology. The simple garden scene foreshadows key themes that come up later.

The couple leads a private research facility, and with funding always on the line, they must schmooze to keep the money coming in—something Will hates to do. Tech celeb Will is on stage talking about their promising progress with artificial intelligence when an individual in the crowd interrupts, "So you want to create a God? Your own God?"

"Isn't that what man has always done?" Will asks in response.

Meanwhile, Revolutionary Independence From Technology, a domestic terrorist group that targets research centers and leaders, is conducting attacks throughout the nation.

RIFT agents shoot Will. He survives the wound, but the bullet was laced with a radiological isotope that has infected his blood—and no treatment exists. The news is bad: Will is terminal within two months. An angry Evelyn conjectures the idea of capturing Will's every thought into their lab's functioning A.I. "We can save him! Look at what they did to him," she says. The Casters' friend and colleague Max Waters (Paul Bettany) is opposed at first but, after Will signs on, Max reluctantly agrees to help.

Lots of characters, details and plot progression are crammed into the first 30 minutes. It's not a spoiler to tell you that Will's body expires, and his A.I. surfaces.

"Transcendence" is a "love it or hate it" movie. The film's script by Jack Paglen is way far out there, and a few of the plot twists about are hard to accept. Based only on the trailer, I had no idea where the film would eventually go. But I loved it.

Not only is the film beautifully captured, the cast is A-plus. Supporting actors include Kate Mara, Cillian Murphy, Cole Hauser, Clifton Collins Jr. and none other than living legend Morgan Freeman.

Evelyn embraces the idea of A.I. Will as her actual husband, and we skirt around with the concept of self-awareness. At that, I dare not unfold the plot any further.

"Transcendence" is saturated in tech terms and settings, but like most good movies, it has many more layers underneath, exploring the irrationalities of love, humanity and the aim at technological singularity.

When I imagine the genesis of this movie, it's a conference room filled to capacity with the world's greatest engineers, scientists, theologians and creative types teleconferencing with a few evangelicals, a politician and hippie-generation pothead while a stenographer dictates the conversation. Then a screenwriter starts the daunting process of putting pen to paper—or most likely, fingers to keys.