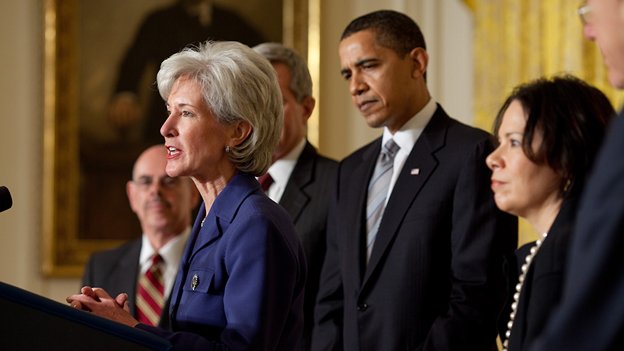 Kathleen Sebelius' (left) resignation sent a clear signal that the White House is seeking to turn the page on a difficult stretch for a law that remains unpopular with much of the American public.

WASHINGTON (AP) — President Barack Obama praised outgoing Health and Human Secretary Kathleen Sebelius for helping to steer his health care law's comeback after a rocky rollout, even as he nominated a successor aimed at helping the White House move past the political damage.

"Under Kathleen's leadership, her team at HHS turned the corner, got it fixed, got the job done," Obama said in a Rose Garden ceremony Friday morning. "And the final score speaks for itself."

About 7.5 million people have signed up for health insurance through the new law, exceeding expectations after website woes stymied sign-ups for weeks when enrollment opened last fall.

The president's praise for Sebelius also served as an implicit defense for the sweeping health measure that will be a centerpiece of his legacy. Still, her resignation sent a clear signal that the White House is seeking to turn the page on a difficult stretch for a law that remains unpopular with much of the American public.

Obama nominated his budget chief, Sylvia Mathews Burwell, to replace Sebelius, calling her "a proven manager" who knows how to get results. The nomination of Burwell, who was confirmed by the Senate 96-0 for her current post last year, appeared aimed at avoiding an election-year confirmation fight.

Sebelius, who has served as Obama's health and human services chief for five years, was instrumental in steering the sweeping health law through Congress in 2010. But her tenure was marred by widespread technical problems that crippled the sign-up website for weeks, sparking calls from Republicans for Sebelius' resignation.

While Obama stood by Sebelius publicly throughout the troubled rollout, it became clear that her close relationship with the White House had frayed. Officials said they felt blindsided by the extent of the technical problems and installed a longtime Obama adviser to oversee fixes.

As she announced her resignation Friday, Sebelius called her work on the health law the "cause of my life."

"We are at the front lines of a long-overdue national change," she said.

White House officials said Sebelius approached the president about stepping down a month ago, suggesting that the close of the six-month enrollment window marked a natural point for a transition.

Burwell still faces steep challenges if she is confirmed, even with the first enrollment window complete. The administration has to improve customer service for millions of Americans trying to navigate the new system. And there's a concern that premiums may rise for 2015, since many younger, healthier people appear to have sat out open enrollment season.

A popular former governor of Kansas, Sebelius has been one of Obama's longest-serving Cabinet officials and his only HHS secretary. But she appeared caught off guard by the sign-up problems last fall and stumbled in many of her public appearances during that stretch.

Sebelius took personal responsibility for the chaotic launch of the website and asked the HHS inspector general to conduct an investigation. That report is not expected for months.

In nominating the 48-year-old Burwell, Obama is tapping a Washington veteran who has a low profile and the respect of some Republicans on Capitol Hill. Though she only joined the Obama administration last year, Burwell held several White House and Treasury posts during President Bill Clinton's administration.

Between her stints in the executive branch, Burwell served as president of Wal-Mart's charitable arm and led the global development program at the Bill and Melinda Gates Foundation.