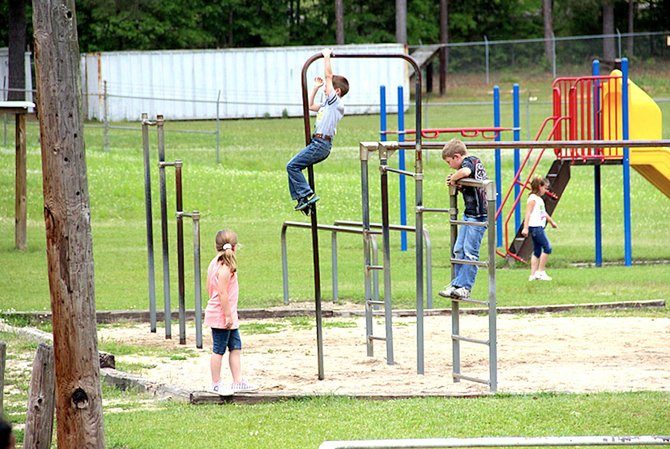 Children in the Richton School District, about 20 miles east of Hattiesburg, play on outdated playground equipment. Across Mississippi, educators say that years of underfunding have left them with inadequate facilities and few supplies.

Year after year, school officials in this poor and largely rural state say they scramble to stock classrooms with basic supplies like textbooks and pencils. They seek donations from outside groups and wonder if they'll ever have enough money to hire coaches and classroom assistants.

Now, a newly formed group is taking a fresh tack on school funding, albeit one that first requires a lot of votes and a constitutional amendment to provide money for cash-strapped schools.

The group, Better Schools (equals) Better Jobs, filed paperwork with the state to form a nonprofit in January and a PAC in February. It will attempt to gather more than 107,000 signatures of registered voters before Oct. 1, in the hope of putting such a question before voters on the 2015 ballot.

Funded by foundations and individuals, Better Schools (equals) Better Jobs includes a host of educators, business leaders, parents and politicians. Fed up after years of substandard conditions, they are pushing for the state's funding formula, the Mississippi Adequate Education Program, or MAEP, to become a constitutional mandate.

Better Schools (equals) Better Jobs argues that better funding will improve lagging school performance and spur long-needed economic growth and development in the state. In the weeks and months to come, Patsy Brumfield, the group's communications director, said Better Schools (equals) Better Jobs will adopt a grassroots approach to get the word out. Brumfield said they plan to reach out to various groups, organizations and school leadership across the state, and use community leaders to reach those who are interested in signing the petition. The new group does not yet have a website, and few details were available.

"We are under no illusions about what an ambitious effort this is, but on the other hand, if there was ever a place where something like this stood to make a big difference, Mississippi would be that place,'' said Kent McGuire, president of the Southern Education Foundation, a public charity that is one of the group's supporters.

Since 1997, school districts in the state have received money based on MAEP, a complex formula that takes into account such factors as average daily attendance and the percentage of students who qualify for free or reduced-price lunch.

In the past six years, though, Mississippi has underfunded its schools by more than $1 billion. A recent report by the Mississippi Center for Education Innovation found the lack of funds has forced schools to raise class sizes and hold off on offering after-school tutoring programs or invest in technology.

Moore said that although "public safety is actually the number-one priority for the state of Mississippi," the Legislature has prioritized funding education for years, often to the detriment of other state departments. "If you look at the other agencies of state government, they have all basically been mugged over the last few years in the name of funding k-12," Moore said. "There's a lot of primary functions of state government that have been sacrificed in the name of educating our children."

Advocates disagree that funding has been adequate, and say that fully funding education should be the state's priority. The ballot question in Mississippi comes at a time when 45 states have filed lawsuits challenging the failure of governors and legislators to fairly fund schools.

In 11 states, litigation is pending, including New York, Florida, Texas and California. In March, a Kansas court ruled that the state was in violation of its constitution for funding disparities between school districts. Kansas's constitution requires the state to "make suitable provision for finance of the educational interests of the state."

The amendment would also authorize state courts to enforce that in litigation.

"If they prevail, it will be very interesting,'' said Michael Rebell, of the Campaign for Fiscal Equity, a nonprofit research and policy center at Teachers College, Columbia University, that champions fair funding. Rebell is an attorney who for years has charged that New York state is shortchanged the entire public-school system by billions of dollars—even after coming to an agreement following a landmark court ruling in 2006.

Rep. Moore said he questions whether the amendment language would change much. "What do you mean by 'adequate'?" Moore said. "Does that guarantee that every child in the state of Mississippi is going to be educated?"

The change in language may open the door to lawsuits such as those seen in Kansas and Florida. In 1998, Florida voters approved an amendment that changed the state's education provision in its constitution. The amendment made education a "fundamental value" and required that the state make adequate provision of education, defined as "Efficient, safe, secure, and high quality."

Since then, several lawsuits have been filed against Florida, citing evidence that state schools do not meet these requirements. One seeks a "remedial plan" by the state to improve and better fund schools.

Brumfield said Better Schools (equals) Better Jobs decided against a court challenge in favor of a constitutional amendment, "so that there will be no doubt it will be the legal obligation of the Legislature to keep its promise." She said the group undertook some polling recently and found plenty of support for the idea of a constitutional change. "Seventy percent of registered voters said they could not trust the Legislature to properly fund education,'' Brumfield said.

Molly Hunter, a nationally recognized expert on issues of school-funding litigation and reform at the Education Law Center in New Jersey, said Mississippi probably has the weakest language around support for education, both in their schools and via MAEP. "They don't fund their schools well enough, so if this would help that would be great. If you care about education and quality opportunities for all kids in Mississippi, it's a great concept. They need it, but they are not getting it," Hunter said.

This report was produced by The Hechinger Report, a nonprofit, nonpartisan education-news outlet affiliated with Teachers College, Columbia University.