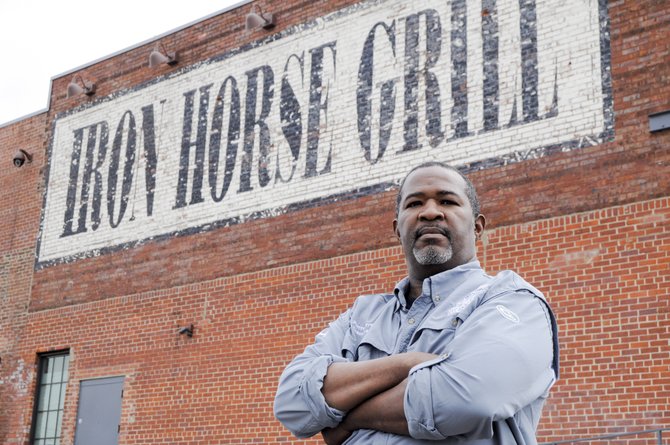 It only took Pierre Pryer Sr. six months to a year to work his way up from dishwasher to head chef at The Iron Horse Grill downtown the first time he worked there, from 1987 until 1998. He returned to the restaurant at the beginning of February this year—as executive chef this time.

In 1987, Pryer was unemployed and thinking of joining the Army. He took the necessary tests for enrollment, and he passed. Not long before that, he saw Iron Horse for the first time and put in a job application.

"It was a Friday morning; I'll never forget. The recruiter called me and said, 'I'm coming to pick you up and bring you down here, and you'll be out of here in two days,'" Pryer recalls. Instead, he told the recruiter that he'd find his own ride to the office. "But I didn't go. I didn't want to leave. I got a call the following Saturday about 3 p.m. from the owner (of Iron Horse) John McWilliams; he needed a dishwasher, and I immediately took the job."

After working two weeks, Pryer cut his thumb open on the slicer and had to get 13 stitches. He took about a month off to let his thumb heal, but when he called for his job, the restaurant had hired someone in his place and offered Pryer two days of work per week.

"I took the two days a week, but I was a man on a mission," Pryer says. He made himself as helpful as possible around the restaurant and in the kitchen, and the owner took an interest in Pryer. Six months after Pryer started working, the head chef spontaneously quit. Williams called Pryer outside for a chat.

"Look, I need a chef. I don't have anyone to bring in right now, but I've noticed that you've been in the kitchen doing everything from dishes to prepping to cooking. You seem to enjoy what you're doing. If you want, I'll give this job to you," Pryer recalls him saying. "He said, .... 'I'm going to win with you, or I'm going to lose with you. I think you can do what I need to have done.'"

Pryer, a Jackson native, graduated from Murrah High School and attended Hinds Community College for a stint where he studied hotel and motel restaurant management. He grew up in a family of seven children, and his mother passed away when he was 9.

"My love of cooking came from my dad," says Pryer, who has one son of his own, a senior at Wingfield High School named Pierre Pryer Jr.

Pryer's father, King Solomon Pryer Sr., always worked two jobs, and his night job was always cooking somewhere. "He had this great vision for us to go out and make our names known," Pryer says about his dad. "So I guess we're somewhat doing that now."