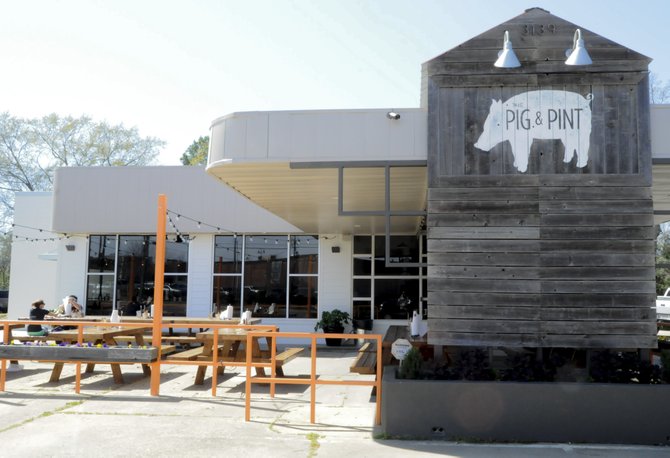 Fondren's new barbecue palace is open and eager to set itself apart in the Jackson culinary world. BThe Pig & Pint opened its doors March 26 after owners renovated the former Mimi's Restaurant space on the corner of State and Hartfield streets.

The Pig & Pint features "competition-level barbecue with a chef twist," says co-owner and chef Grant Hutcheson (the Pig guy). The owners compete with the Slapjo Mama Championship BBQ Cooking Team in the Memphis Barbecue Network—many of their trophies are on display at the restaurant. "About half—we ran out of room," Hutcheson says.

Some of Pig & Pint's classic-with-a-twist menu items are baby-back ribs with a Pepsi glaze and pulled pork tacos. And while pork is obviously king, the Pig & Pint isn't constrained by much—chefs plan to put their barbecue spin on proteins such as brisket, lamb, shrimp, duck and more for both seasonal menu items and specials.

Beyond the traditional pulled pork sandwich, too, the boudin burger and a pork belly corndog are popular menu items. Everything is made in-house, including the potato salad, salad dressing and, of course, the barbecue sauce. The staple sauce is tomato based with some sweetness, but the restaurant offers other dipping options to discerning customers, including a sweet potato hot sauce and more vinegar- or mustard-based blends.

The group behind The Pig & Pint was originally looking for a place to open a fine dining farm-to-table concept with a wine bar, but when the space became available (but didn't fit for a wine bar), the partners reconsidered their concept, and realized that "Fondren needed barbecue." "We couldn't find a place we were happy with in town. You get spoiled going to competitions and eating all this great barbecue," Hutcheson says. But, because of the group's interest in fine dining, "you'll see a little more attention to detail in the food and the service," he adds.

Hutcheson has years of experience in the restaurant business, having started at the Parker House Restaurant at age 15. He also worked as a sous chef at Ruth's Chris Steakhouse and helped open Parlor Market, working as pastry chef there for a time.

As the "Pint" part of the "Pig & Pint" indicates, the restaurant also has an extensive beer selection specializing in high-gravity and craft beers, growing to about 60 varieties in bottles and six Mississippi beers on tap. Chris Clark (the Pint guy) is a guild-certified sommelier for wine, and is working on a similar certification for beer.

The restaurant has indoor and outdoor seating and, upon occasion, will host live music. The Pig & Pint team participated in the Livingston Farmers Market during the 2013 season, which allowed them to test and hone many of the menu items now offered at the restaurant.

Hutcheson says he's pleased with the first week, and the way the staff has banded together to iron out the details that crop up in the opening days of any restaurant. "Saturday was our biggest day, and the biggest ass-whooping I've had in my career," he says. "And I was loving every minute of it."