Media Digs In, Drills Down on Climate Coverage 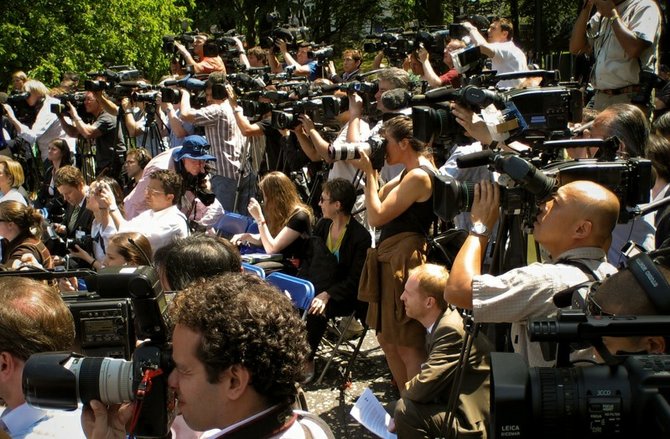 "Deniers" see news media in lockstep with a conspiracy of scientists, bureaucrats, hippies and ne'er-do-wells to steal the world's energy markets and force us all to change our ways. "Believers" fault media for failing to keep the public well-informed on climate impacts coming down the pike. Whatever the worldview, lately we've seen enough media out there for both sides to get their fill. Photo by Courtesy Flickr/Ernest Moeksis

"Deniers" see news media in lockstep with a conspiracy of scientists, bureaucrats, hippies and ne'er-do-wells to steal the world's energy markets and force us all to change our ways.

"Believers" fault media for failing to keep the public well-informed on climate impacts coming down the pike.

Whatever the worldview, lately we've seen enough media out there for both sides to get their fill.

Start With the Deniers

Given the growing weight of science and on-the-ground evidence that human-caused climate change is underway, I'm surprised by the strong foothold outright climate denial continues to have in media today.

Investors' Business Daily, a fierce and longtime opponent of any and all environmental initiatives, continued to press its long and bitter divorce with reality via an editorial titled "Global Warming is a Fraud," backed up by three pieces of evidence and the obligatory demonizing of Al Gore.

The evidence? 1) We haven't had a Sandy-like storm since 2012; 2) Tornadoes are down, too; and 3) A rowing team whose attempt to cross the Arctic was thwarted by the remaining ice pack. You have to admire IBD's determination to dig in, but perhaps they should try the thawing Arctic, where it's easier than ever to dig. Just watch out for the methane releases.

On the TV side, Fox News "debate" on climate change this summer could be the museum piece for the ages on climate denial. "The Five" is a daily Fox show where four conservatives out-shout an elderly liberal, former Carter Administration official Bob Beckel. They tackled climate change on the day of President Obama's June speech on the topic, and three-fifths of the Five agreed with host Eric Bolling that climate science has been "utterly debunked." Oh, and they took a swipe at Al Gore.

On the Flip Side

Al Jazeera America launched last month, and in its early days AJAM shows potential for delivering on its promise to take the news more seriously than its established cable competitors.

The liberal group Media Matters for America said AJAM's first-day attention to climate change nearly matched what other networks do in an entire year. AJAM has also devoted segments to fracking, tar sands, rising dengue fever in Florida, and a half-hour on western wildfires featuring a spectrum of guests from the Forest Service to the National Wildlife Federation to the libertarian National Center for Policy Alternatives.

There's been some strong reporting from Canadian outlets on the breathtaking about-face in environmental policy up north.

Postmedia, a multi-city newspaper chain, and the nationally-circulated Globe and Mail have paid particularly close attention to stories that have some impact on, but no visibility in, the United States.

Since taking the government's reins in 2006, Prime Minister Stephen Harper has led the country on an anti-regulatory, pro-fossil fuel binge that could give environmentalists the blues and turn Dick Cheney green with envy.

And of course, in the tarsands of Harper's native Alberta, the nation weighs a potential economic bonanza against tremendous environmental consequences. The P.M. is all about the former. Loud and relentless protests have pushed the Keystone XL pipeline story into some national prominence, but the change underway in a nation once considered a world environmental leader is still an untold story in the United States.

A major reason for this is that U.S. media really hasn't covered much of anything from Canada since Celine Dion mercifully faded away. The last fulltime U.S. bureau in Canada folded in 2007, when Doug Struck, then of the Washington Post and now an occasional Daily Climate contributor, packed his bags and turned the lights out. Specialty publications and nonprofits, notably our colleagues at Inside Climate News, have pressed the pipeline and science stories, but they're largely AWOL from "mainstream" media.

Perhaps that's because the environmental reporter has become an endangered species of sorts as newsrooms have shrunk. That trend continues.

Perry Beeman, longtime environment reporter at the Des Moines Register and former President of the Society of Environmental Journalists, left the paper last month for academia. Another Gannett paper, the News-Journal of Wilmington, Delaware, announced 27 layoffs on August 26.

The News-Journal has distinguished itself of late with thorough coverage of climate impacts in America's lowest-lying state. Reporters Jeff Montgomery, Molly Murray, and Dan Garrow were runners up this year for the National Academy of Sciences' communication awards for their series, "Climate change puts coast in crosshairs."

Many of us have come to presume that "layoffs" and "environment reporter" were meant to be uttered in the same sentence. But in a brief email, News-Journal editor David Ledford said the paper's climate and environment coverage, and reporter Jeff Montgomery, were surviving "just fine."

Also an apparent casualty is veteran Salt Lake Tribune environment reporter Judy Fahys, axed along with 20 percent of her colleagues at the paper on last week.

Profit radio is not exempt, either. The mighty and the meek have taken hits lately: NPR announced planned layoffs of 10 percent of its staff and across-the-board management changes. No word yet on how deeply the network's science and environment coverage will be hit.

When we have voters who elect people of one party to Congress who are not just climate deniers, but science deniers and who also chairmen and members of the Science Committees in Congress we have a problem. We also saw this when an ambassador to the U.N. was appointed who did not believe the U.N. should exist. These are not people elected to government to make changes in government, but to stop government from doing much of anything. And over the last several years, they have succeeded.