Lion Around ‘A Quiet Town’ 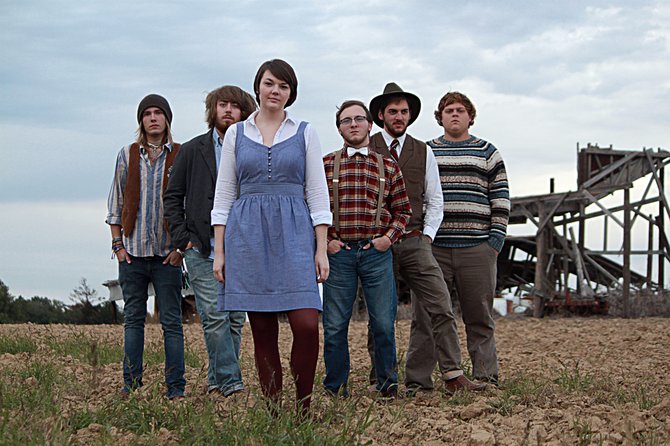 Zach Lovett and Spencer Thomas of Dandy & the Lions always dress to impress and are all around dapper, humble fellows. But beneath the bright smiles, well-combed hair and trendy threads are talented southern souls. These gentlemen are true musicians, taking the stage and spreading the love of music one show at a time. This month, Dandy & the Lions is one of 18 bands performing at Mississippi's Otherfest in Cleveland.

Dandy & the Lions formed in January 2011 in Lovett and Thomas' Delta State dorm room. The two met through their involvement in theater and have been inseparable since. Lovett, 21, took interest in the banjo, and Thomas, 21, knew the basics of guitar. They enjoyed singing together and sharing their songwriting capabilities; however, they were certain they needed more instruments to form a band.

Since then, the band has been hard at work, writing one original song after another and performing every given chance. The band began recording its first album, "A Quiet Town," summer 2012 with Nashville-based sound engineer Michael Freeman. They released the album last January.

The record features the band's homegrown talent. Its creative content is based on the overall love from their family and town members' support. The album has the fun kick and twang of Bill Monroe and the Bluegrass Boys with a side of elegant sultriness similar to Hazel Dickens. "A Quiet Town" is a conglomeration of catchy melodies, instrumental incredibility, and heart-melting harmonies and lyrics that easily enforce each song's emotion.

"This album is a folk record, but it's a mixture of all the things that have influenced us up to this point," Lovett says. He and Thomas note a broad range of musical influences, including Conor Oberst of Bright Eyes, Emmylou Harris, Neil Young, Bob Dylan, Iron & Wine, M. Ward, Band of Horses and Dan Fogelberg.

"People are like, 'Are you a bluegrass band? Are you a folk band? What are you?' I just have to say, 'We're folk,'" Lovett says. "At the basis of that, I'd like to say we're singer/songwriters because that's what Spencer and I do. That's how all the songs begin—with words, usually."

With a strong fan base, especially in Cleveland, Miss., among their friends and family, the band has high hopes for the future. "We hope to sell plenty of albums on our own," Thomas says. The band also would like to gain more fans in the Jackson area and put together a southeast regional tour.

Dandy & the Lions performs on the Abita Beer stage at this year's Otherfest (4015 Highway 61 N., Cleveland) Sept. 21 at 3:45 p.m. Admission is $15. Stream "A Quiet Town" on Spotify, or buy it from Amazon, CD Baby or iTunes. Listen to the singles "Twice the Man" and "Passion Dance" on the band's Facebook page.