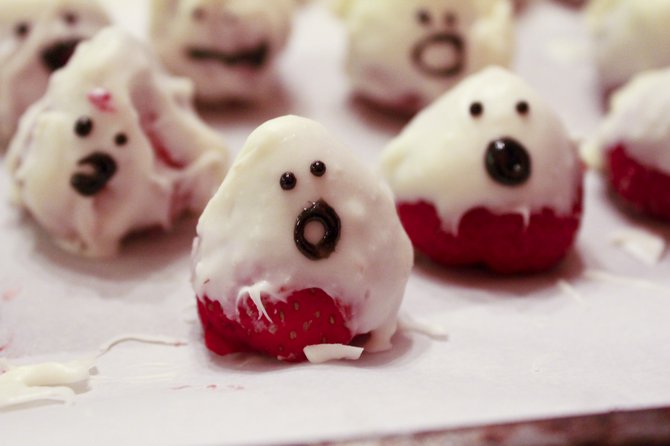 With a little imagination and elbow grease, you can make spooky and fun Halloween treats. Photo by Amber Helsel

From the time I could walk, my mom took me trick-or-treating on Halloween. I think I may have missed it one time because a friend and I decided that we'd rather give out candy. Even when I got older, I convinced my mom to let me tag along with the younger kids.

I'm older now so trick-or-treating isn't as fun as it used to be, but my favorite tradition is still the candy. As a working adult, I can go to the grocery store and buy as much as I want, and I don't have to share it with anyone. It's mine—unless, of course, I want to use my candy for good and not evil.

This year, I wanted to use it for good. Over the last few weeks, the Jackson Free Press staffers were busy putting out our holiday issue of BOOM Jackson magazine, and needed something to keep going. To provide some glucose energy and celebrate Halloween a little early, I decided to do something to make everyone's day a little brighter.

Candy-coated strawberries are a classic, and turning them into little ghosts is easier than you think.

De-stem the strawberries by taking off the leaves and then using a knife to remove the rest of the stem. Turn your stove eye on medium to low heat. Put two cups of water into a medium-size sauce pan. When the water begins steaming, place a large bowl on top. Drop a piece of the candy melts in. When it starts melting, pour 8 ounces of the candy in. Stir it constantly with a rubber spatula. When it is halfway melted, turn the heat off, and stir the candy until it's completely melted. Take it off the stove and dry the bottom of the bowl thoroughly. Add the other 4 ounces and  stir vigorously.

When the candy is done, start dipping the strawberry in. This part is messy, but it's necessary to make your fruit as ghostly as possible. To get the best coverage, dip the strawberry, swirl it around and remove it quickly, wiping the excess onto the side of the bowl. Place your ghosts on a parchment sheet-lined baking pan. Allow them to set for at least 30 minutes. Cut the tip off the tube of icing and draw little faces on the strawberries.

My treats did not come out perfect, just as I expected. I tried to make "ghosties on a stick," but I found it was easier to just dip the berries. I got my hands messy, and had a few errors on the way, but even though they aren't totally perfect, they came out very cute, which is what I  wanted anyway.

The beautiful thing about this dish is that it's up to your interpretation. You can make this treat as creepy or as fun as you want.

It's best to prepare it right before you're serving it. If you bake it the night before, I recommend baking the cake the night before and finishing the treat next day, because pudding only keeps its form for a day before turning liquid.

Preheat the oven to 350 degrees. Add the flour, sugar, salt and baking soda into a mixing bowl and stir to combine. Beat the vinegar, canola oil, vanilla extract, and water into the dry ingredients until everything is completely combined and the batter is smooth. Beat the eggs in one at a time. Don't be alarmed if the batter is really liquidy. You'll end up breaking the cake up. Pour the batter into a buttered cake pan. Bake for 30 minutes, or until done. Stick a toothpick in the middle before you pull the cake out of the oven. If the toothpick is clean, it is done.

While the cake bakes, make the instant pudding by the directions on the box. If it says to use skim milk, it's OK to use whole milk.

After the cake has cooled, break it up into chunks. Using a food processor, pulse small amounts of it until you have a pile of "dirt." In a large mixing bowl, toss the candy with the cake crumbles. Don't be alarmed if you hear the cake sizzling—it's just the Pop Rocks doing their thing.

Pour the pudding into a large rectangular baking dish and spread it evenly. Place some creepy crawly gummy candy in it, and then pour the cake mixture on top. Voila. You have a creepy but edible plot of  graveyard dirt.