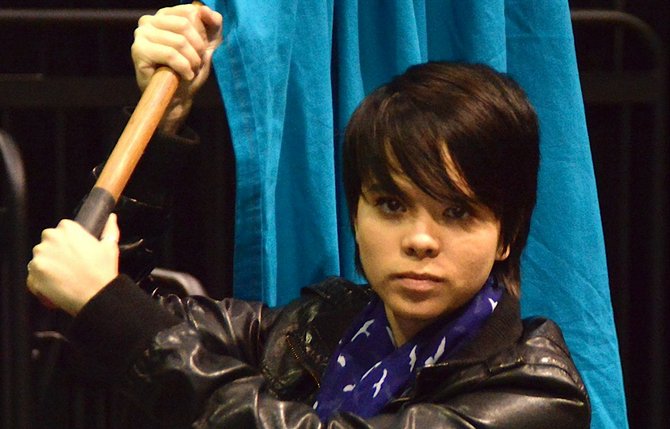 Laina Faul, who plays the lead role in “Johanne d’Arc,” and her cast mates used many improvisation techniques while in rehearsal to get into the story of Joan of Arc. Photo by Courtesy David Sprayberry

Joan of Arc goes on stage fueled by improv for Belhaven University's production of "Johanne d'Arc."

The university's theater director and department chairman, Joe Frost, decided to let the creative process of improvisation determine and guide the script for "Johanne d'Arc." During improvisational rehearsals, the students tailored their roles to fit the characters.

"That's when I write the script, after the creative process ensues," Frost says. The cast worked on improvisation together for about a month before Frost wrote a script based on the scenes they workshopped. Then, they continued to tweak the script through rehearsals.

For the production, an all-female cast researched Joan of Arc historical accounts together. Using their knowledge and improv skills, they built the characters, defined their scenes and applied dialogue based on their interpretation of their characters to construct the play. Joan of Arc's story as a peasant girl God called to lead the fight against the English for the reestablishment of the French throne expands based on how far the actors wish to hone in on the adventures of the heroine.

"I want to produce a new point of view and interpretation, painting another picture of what audiences already know about the bold escapades of the historical person," Frost says. "Possibilities exist through improvisations that don't come out in a pre-scripted play. (Students are) given the opportunity to personalize their feelings because their guard is let down." Many cast members are returning students who already have acting experience.

"But there were so many new students too that gives us fresh perspective, evoking even more invention," he says.

Students went through rehearsal exercises to prepare for the experiment in improv. The exercises helped them to become more accepting and comfortable with fellow actors.

This will be an "in the round" production that allows for flexible seating which brings the audience in close contact with the actors as they perform.

Laina Faul will portray Johanne. All other roles will interchange. Belhaven faculty members Kris Dietrich and Nadine Grant are designing the final set and costumes, respectively.

Johanne d'Arc" premieres Oct. 24 at the Center for the Arts at 835 Riverside Drive on the Belhaven University campus. Performances run through Nov. 2 with matinees at 2 p.m. on Oct. 26 and Nov 2. For tickets and performance schedules, call 601-974-6494 or email [email protected]