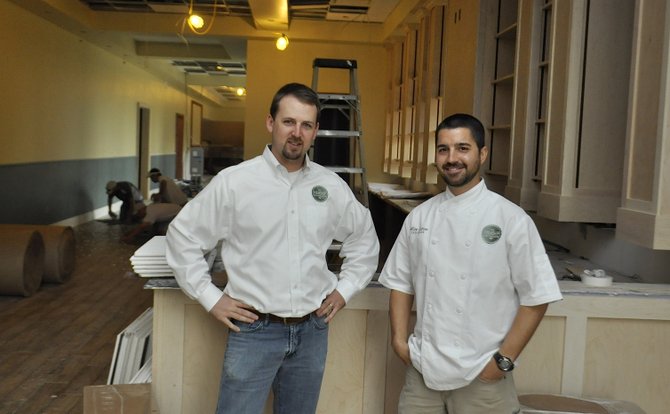 Steven O’Neill (left) and Alex Eaton joined forces to pursue a particular restaurant vision in Belhaven, with O’Neill spearheading the bar and Eaton in charge of the rustic menu. Photo by Trip Burns

After a long summer of building, the staff of The Manship Wood Fired Kitchen hopes to open Oct. 31.

Steven O'Neill and Alex Eaton barely have 60 years between them, but their combined restaurant experience surpasses their youth. They'll be blending their unique talents and accumulated ideas at a new restaurant, The Manship Wood Fired Kitchen. The upscale dining arrangement in Belhaven will offer a Mediterranean- and southern European-inspired menu. The kitchen will be largely dependent on wood-fired ovens and grills, an experience and an aroma that will make this upcoming restaurant rustic and innovative.

O'Neill, 32, and Eaton, 28, are both from the Jackson area, but didn't cross paths until a few years ago when a mutual friend introduced them. Shortly after, the idea for a new restaurant took shape.

"He (Steven) had the restaurant and location picked out, but he didn't have the concept," says Eaton, the executive chef at Manship. "So we brought those two things together."

The restaurateurs contribute to the eatery 50/50, supplying ideas and energy to different aspects of Manship. O'Neill is the managing owner of the restaurant and a connoisseur of wine and spirits, holding a level-one sommelier's certificate. His most recent business ventures included a stint as the general manager of Parlor Market in Jackson, but his restaurant experience goes back to his teens when he was busboy at Copeland's. He has been in the restaurant business since then, with the exception of a tour in Iraq for which he received a Purple Heart.

Eaton contributes to culinary side of Manship, offering up a menu of Greek, northern Italian and Spanish dishes that will come together in what he refers to as the most "honest" form of cooking—over a wood fire.

"The first restaurant I wanted to do was going to be a wood-fired restaurant," Eaton says.

He spent time working at Rooster's Wood Fired Kitchen in Charlotte, N.C., and says his time there greatly influenced his interest in that style of cooking. Eaton has worked for Chef John Besh in New Orleans and, most recognizably here in Jackson, was a chef at Table 100 when it first opened. His love of food, and of rustic cooking, goes back even further.

"While most kids in the Boy Scouts were bringing Lunchables to camp," Eaton says, "I brought stuff my mom had packed me to cook over the open fire."

Manship isn't exactly camp. It's rustic and refined at the same time, a cosmopolitan venture that focuses on not cutting corners on recipes and using some of the freshest produce available—some of it to be supplied regionally and locally.

O'Neill and Eaton are at the cusp of a culinary movement that is moving to more local, healthier and, frankly, harder-to-prepare dishes. But that's what they're most excited about.

The Manship will offer a selection of grilled and rotisserie bone-in meats and fish, cooked over hickory wood and reminiscent of a country meal in Greece or Italy. The menu steers clear of heavy, saturated foods, as well as ingredients that pull attention away from quality produce and kitchen craftsmanship.

The bar will reflect the Mediterranean menu by offering regional wines and beers from that area, but it will also have a stripped-down approach to its cocktail menu, using fresh fruit and other ingredients while avoiding sugary mixers. O'Neill is looking forward to a seasonal beverage that he's been working on called "The Headless Horseman," a fall cocktail that pairs Cathead pumpkin spice vodka with autumn flavors such as cinnamon, allspice and maple bitters. (Get the recipe in the November-December issue of BOOM Jackson magazine, out the first week of November.)

As for the location, O'Neill loves the fact that Manship will be in the heart of Belhaven.

"Our decor on the inside reflects the look of the Belhaven neighborhood," he says.

"It's one of the oldest areas in town, so most of the interior elements are things that you would've seen in the 19th century when those homes were built."

O'Neill and Eaton have set a tentative soft opening date of Oct. 31. Once open, The Manship Wood Fired Kitchen (1200 N. State St.) plans to serve food and drinks from 11 a.m. to midnight Monday through Saturday, with the kitchen closing at 10 p.m.