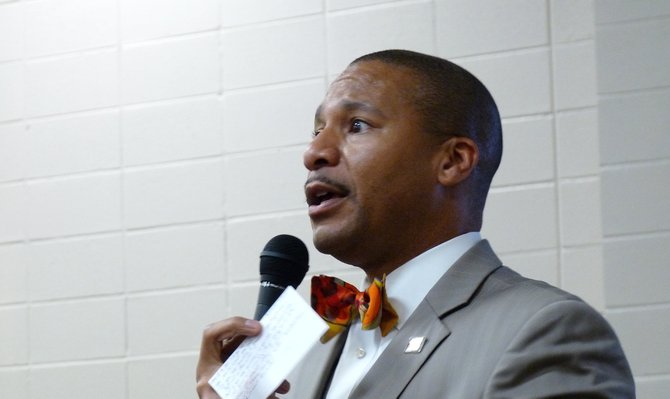 JPS Superintendent Dr. Cedrick Gray—now in his second year at the helm of Mississippi's largest urban school district—urged parents to take better account of what their children are doing on social media. Photo by Tyler Cleveland.

After students at Murrah High School used social-media tools to brag about—and in some cases embellish—several fights this week, Jackson Public Schools officials are urging parents to be vigilant about what their children are posting and viewing on the Web and their smartphones.

JPS Superintendent Dr. Cedrick Gray said only one altercation took place Thursday at Murrah, contrary to social-media reports that originated with students. That fight, Gray told reporters Thursday evening, was between two female students and was unrelated to the online activity. Gray added that seven fights have been recorded in November, despite rumors of as many as 30 fights in a span of a few days.

Nevertheless, Gray—now in his second year at the helm of Mississippi's largest urban school district—urged parents to take better account of what their children are doing on social media.

"Literally take their cell phones, make them log into their social-media apps and tell them to leave the room ... Know which social-media outlets they are using—Facebook, Twitter, Instagram, Tumblr—and know their screen names or handles," Gray said.

Gray addressed the ongoing problems immediately before a meeting of Alignment Jackson, a collaboration of JPS, city of Jackson officials and area not-for-profit organizations developing solutions for the beleaguered public-school system.

Although most of the social-media posts pertained to fights, adults became alarmed Wednesday when rumors about a planned shootout began circulating on social media and escalated when local news organizations began reporting them. Those rumors "turned out to be largely a non-event that incited students and parents unnecessarily," Darryl Anderson, the district's chief communications officer, said in a statement to the news media Thursday morning.

Still, the district initiated precautionary protocols, which involved calling Murrah parents and sending a letter home with students Wednesday afternoon to explain the situation, which included the circulation of the fight videos as well as a purported "fight schedule" that touched off a panic.

"The letter, circulated via Instagram, is clearly not a legitimate communication to parents," Anderson wrote in a separate statement sent to the media overnight.

Additionally, JPS is also discouraging what Anderson characterized an "Instagram effort" to encourage high school students district-wide to participate in a 2 p.m. walkout.

Gray promised more investigation in the days to come. "Rest assured, we will address this issue with our students. And, if necessary, we will take appropriate action in accordance with our (school) district's disciplinary policy," Gray said.