Are Federal Call Centers Up to the Task of Enrolling Millions in Health Plans? | Jackson Free Press | Jackson, MS

Are Federal Call Centers Up to the Task of Enrolling Millions in Health Plans? 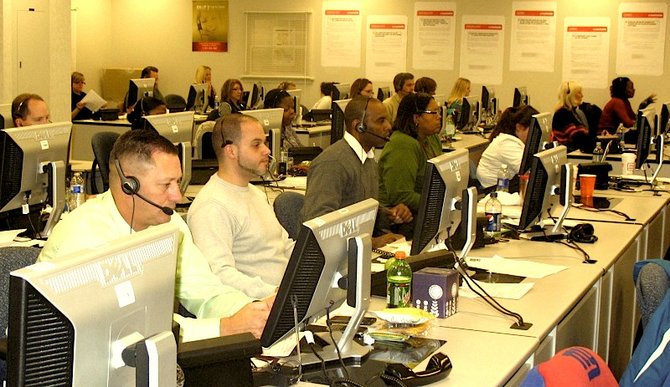 Insurance exchange call centers were touted by President Barack Obama this week as one of several alternatives for consumers having trouble shopping and enrolling in plans through healthcare.gov, the bug-ridden website run by the federal government for residents of 36 states. Photo by Courtesy Flickr/State Farm

HARTFORD, Conn. — An elderly man calls to ask if the land he owns will count as income to qualify for health coverage through Medicaid. A legal immigrant asks if she can sign up for a health plan through the state's online insurance marketplace. A broker wants help to become certified to start selling coverage.

It's 10 a.m. Monday inside the call center of Connecticut's new insurance exchange established under the federal health law. On the 21st floor of the downtown Prudential Building, about 25 operators in blue shaded cubicles are talking on telephone headsets while a dozen more callers wait on hold.

"It's controlled chaos," said David Lynch, the call center manager for the marketplace.

Centers like these were touted by President Barack Obama this week as one of several alternatives for consumers having trouble shopping and enrolling in plans through healthcare.gov, the bug-ridden website run by the federal government for residents of 36 states.

"The call centers are available," he said, reciting the telephone number—1-800-318-2596. "You can talk to somebody directly and they can walk you through the application process...Once you get on the phone with a trained representative, it usually takes about 25 minutes for an individual to apply for coverage, about 45 minutes for a family."

But consumer advocates say the centers were never meant to be an alternative to the insurance exchange website. They were conceived of as a supplement - a way to offer some consumers more help to understand their options.

"The telephone call center is not a realistic alternative to the website," said Adam Linker, health policy analyst for the North Carolina Justice Center, a consumer advocacy group. "The marketplace was billed as a place to easily shop and compare plans, but on the phone there is no real way to do that."

Others agree that the call centers' representatives can provide only limited help to those who want to shop for coverage. That's because some states have dozens of plans to choose from, a process that could take hours to sort through on the telephone. In addition, the representatives are also having trouble getting information from healthcare.gov, which affects their ability to verify people's identities and income.

One healthcare.gov operator acknowledged she cannot provide exact prices and benefits before the caller answers a series of questions to set up an account and verify their identity. She can offer average premiums in a particular area without going through that process.

John Foley, a lawyer with the Legal Aid Society of Palm Beach County in Florida, which received federal funding to help people navigate enrollment, said call center operators face many of the same delays as consumers because of the malfunctioning federal website.

"We are facing the same glitches on the telephone," he said. "And even if it were working, it would be quite time-consuming" to go through all the plans a consumer might want to compare. He is advising people to wait until the website becomes easier to use.

An administration spokeswoman said that as of Wednesday, federal call centers have received more than 1.3 million calls and they are enrolling people in plans, although she did not offer details.

She noted the centers operate 24 hours a day with little or no wait times to talk to a representative.

There are 17 call centers with more than 10,000 trained representatives to assist consumers and they are managed through a $530 million one-year contract to Alexandria, Va.-based Vangent, a General Dynamics subsidiary. States such as Connecticut that have set up their own state marketplace also have their own call centers.

Joan Alker, executive director of the Georgetown University Center for Children and Families, said the call center was always "an essential piece of the puzzle" to get people enrolled. She said asking people who really desire insurance coverage to spend an hour or two on the telephone isn't too much.

"The real challenge for the call center and others helping consumers is that this is a complicated process," she said.

Timothy Jost, a consumer advocate and law professor at Washington and Lee University School of Law, said that for the young and healthy, who may be less motivated to buy coverage, hours-long phone calls to buy coverage "probably will not suffice."

The situation is easier in the Hartford call center since that state has set up its own exchange and its website is functioning. Since Access Health CT opened its virtual doors Oct. 1, an average of 1,300 people a day have called or asked for assistance to help fill out applications. Over 10,000 residents have started applications and more than 4,200 have enrolled in plans.

"Telephone assistance is something that people really want," said Lynn Quincy, a senior policy analyst with Consumers Union. "Many people are intimidated by the task of buying insurance on their own and it gives them a little more confidence to talk to a live human being, even in a quick phone call."

Benjamin Hunnicutt, who manages the Hartford call center for Maximus, said most callers are older or poorer than people using the website. The top questions are about premiums and how to estimate 2014 income to calculate what federal subsidy they might be eligible for. The operators also have access to provider networks so they can tell callers if their doctor or hospital is in a given plan.

The operators received two and half weeks training on the health law and the marketplace before they began working in September, Hunnicutt said.

Though they have scripted answers to many commonly asked questions on their computers, the operators are advised not to read from them.

Some do enroll over the phone, which can take about 50 minutes. The exchange did not know how many had completed enrollment online.