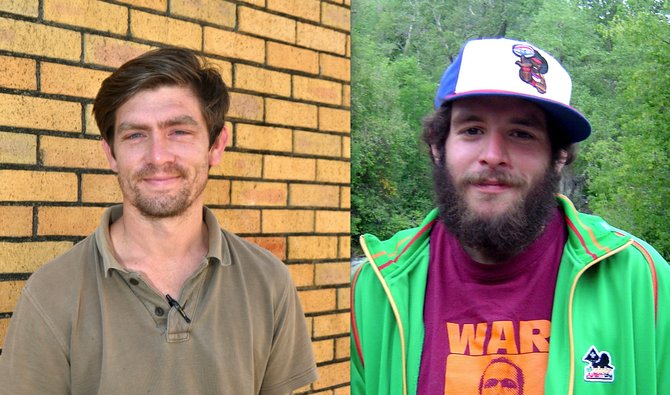 When musician Cody Cox sought to release Goodman County's last album in 2005, he wanted it to be legitimate. A friend had given him the nickname of Elegant Trainwreck, and Cox used the name as somewhat of a label or brand for the work he was producing. Within the past four years, however, Elegant Trainwreck expanded to release Jackson-area music other than what Cox created.

Since the union, Elegant Trainwreck and Homework Town have released five records, including Furrows' "Small Talk" and James Crow's "Religion Guns Money." This Saturday, the two labels celebrate their one-year anniversary with a concert at Hal & Mal's.

You wanted to legitimize putting out records on your own?

Cody Cox: I had been basically funding records of my own before, just with the band saving up money, or me saving my work money and then putting a record out. So, essentially, it was giving it a name instead of just saying the band did it. I was like, 'If I'm going to do this, I may as well give it a name'—almost like having a storefront. Even if it was just one person, at least I was working underneath an umbrella.

It was a nickname a friend of mine gave me, and I was like, 'Sure, Why not?' Now it's taken a life of its own; it's got legs now so to speak. At the time, it was just like a name to use so it wasn't just like, 'Hey, here's a record,' (with) no one being able to find it other than seeing us live.

That's where it started, and then I was like, 'Well, if I'm going to do this, I may as well help all these other bands who don't have anyone to put out their records and don't know how to do it.'

I spent years making terrible and poor decisions. At least I could cut some of the dead time of people making those mistakes and figuring out how to do it; I could help them financially and also with advice.

Why did you want to help?

CC: At some point, I have to come to terms with the fact that I'm going to be too old to hang out in smoky bars or play loud music all the time. I can't physically keep doing it. But what I can do is help out someone younger than me who has the same drive I had 15 years ago and help them figure out a way to get their music out, and get an audience and get on shows or festivals. That way, the scene keeps going. ... If someone isn't helping, it's either going to thrive on its own or its going to die. There's no middle ground. I like to be in the middle where I can at least help and, maybe, for a little while, keep a scene going.

A band can put out one record with me and say, 'Oh, I've got this figured out now, I can do this on my own,' and want to do it on their own—that's fine. There's no contractual obligation. It's more like, 'I like this record, I like this band, and I want you to continue making music. Maybe I can help by putting up the money and booking shows.

Then when I'm 50, I can be like, 'Look at all these bands that are playing in my home city.' If I want to, I can go see them and, if not, they're there for everybody who does. It's a good thing.

Garrad Lee: Ultimately, we just feel that whatever we do is good for the city as a whole. People complain that there's not much to do or there's not much music, but there is. There just hasn't been an umbrella for a lot of it to operate underneath. That's the reason I started what I did—just to put out my friends' albums. Now, you look back and, for (several) years ... we've put out a lot of our friends' music. And we're under the impression—no matter how faulty it might be—that it's beneficial to everyone. It's beneficial to the whole city, which is more important. We don't make any money off of this.

Why did you start Homework Town?

GL: I've always wanted to put music out because I don't have musical talent of my own. ... The whole idea behind Homework Town is that it's intimately connected to Elegant Trainwreck but, at the same time, it's kind of its own thing. ... We find a lot of the same things interesting, but I can expand Elegant Trainwreck by adding hip-hop artists. When (Cox) started Elegant Trainwreck in 2005, he never thought that he would be putting out rap albums and split 7-inch (records) with rappers. That's why I say it's beneficial for both of us: It expands his roster, and it also expands the reach of what I can do. I didn't have to start out on my own.

CC: There's definitely a mutual appreciation. ... It's like mutual exposure. There's a whole bunch of hip-hop in the city that I've just fallen in love with that I didn't even know existed for years. Now I can meet those people and see how creative these artists are.

GL: We've seen this happen over the past year or year and a half where the different sides are coming together.

We had the idea for Liver Mousse and 5th Child. Then there's 5th Wolf—5th Child and Spacewolf—which neither of us had anything to do with. It makes me immensely happy because that's the vision we had. But now that we've mixed it up, people are making it happen. That's why it's important to a music scene, not just a hip-hop scene or an indie-rock scene.

People used to say that there's no good hip-hop in the city. We didn't make it happen, but we've helped facilitate that by introducing people to each other (through) the Blender (series) and the co-releases.

Now, you might look around at a That Scoundrel show, and 5th Child and James Crow will be there. DJ Young Venom is at Spacewolf shows. ... The music scene has been here; we just try to do something about building bridges and connecting it all together.

What challenges do you face?

GL: Most of what I do is put on shows and events, so just dealing with the stress of that. But it's cool, because in the city there are tons of people who are willing to help out. There's people who donate lights, there's people to do visuals (and) sound. You really find yourself middle-manning a lot of that kind of stuff.

Challenge-wise, after financial, it's figuring out what you want to do and bearing down and doing it. You know, we work full-time, and there's that aspect to it.

What type of growth have y'all seen?

CC: It's probably more of an intangible growth than anything else. Garrad mentioned giving it a name or branding it, and that's essentially it. ... More recognition—like seeing Homework Town or Elegant Trainwreck on the bottom of a poster, even if it only means an extra 25 people are going to show up to the event.

GL: The logo for Homework Town is my face. So I'll see T-shirts and stickers, and that trips me out. ... Seeing somebody at a random show wearing a shirt with my face on it, that's kind of funny.

When you're creating something, if people know what you're doing ... and recognize you for it, that's awesome.