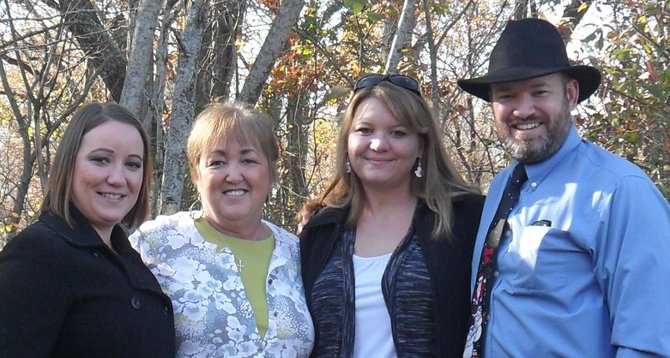 Robin Burton (shown with daughter Lindsay on the far left, son Tommy on the far right, and Tommy’s fiancee Michelle Beard to his left) mothered kids across Jackson in addition to her own. Photo by Courtesy Tommy Burton

When I was in elementary school, my family lived in an apartment complex. My dad was just beginning a career in sales, and Mom stayed home and took care of three or four kids, including me and my kid sister.

Summers were always fun; sick days, not so much. Imagine these small children, too young for kindergarten but slightly older than toddlers, all in a two-bedroom townhouse apartment with my mother. Somehow she managed and we kids simply didn't know any better or different.

A few years later, Mom started her official career in childcare at the daycare at St. Dominic's Hospital, called Domini-Care. She started in a toddler classroom, but moved to new babies shortly thereafter where she stayed until she retired in 2011. Chances are, if you had a child enrolled at Domini-Care between the mid '80s to 2011, Mrs. Robin took care of them.

A couple of years ago, I had stopped in for a visit (probably to borrow some lunch money). Most of Mom's co-workers were like extended family to me. A young man in his early 20s walked in and someone asked Mom if she remembered him. Not only did Mom remember him, she remembered his siblings! I am still amazed that Mom could recognize this young man who she took care of as a baby. I further realized Mom's rock-star status at St. D when Dad had some surgery and it felt like half the staff at St. D stopped in to check on him, just because they knew he was Mrs. Robin's husband.

I understand that it is a big deal when a mother has to return to work and leave her new baby in daycare. It's nice and convenient to be able to stay home and take care of the kids, and I applaud the women who are able to do that, but I also realize that in this day and age, most women have careers and work in addition to being a mom.

Even in retirement, Mom is doing what she does best. While my cousin's husband was serving in Afghanistan, she helped out with the family's children. Remember the kids from the apartment? One of those kids now has three boys of their own, and Mom takes care of them during the week.

This summer, Mom is finally going to take some time off and travel. In addition to raising my sister, Lindsay, and me, she helped raise countless of other little ones.

Mom, as I reflect this week, I realize the many hats you wore as we were growing up and I now know that you were always a little more than just my mom.