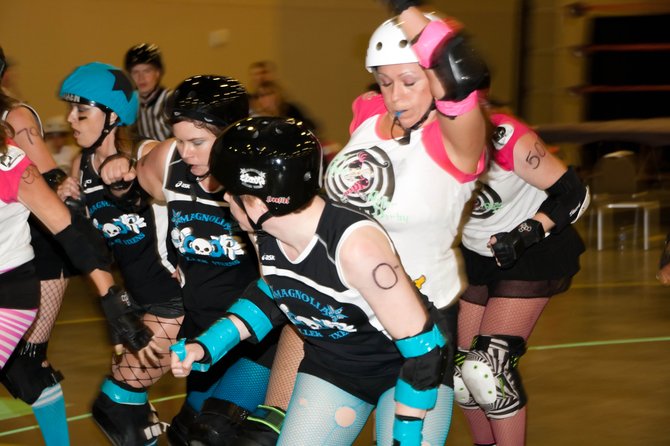 One week from today, most of the nation will take a break from work and celebrate Independence Day. To get a jump on the holiday, this Saturday, June 29, is shaping up to be one of the busiest days for metro area events.

People looking for something outside the realm of picnics and fireworks—or those old enough to enjoy a blast from the past—might consider heading for the Jackson Convention Center and "Independence Slay." That's where you'll find Jackson roller-derby team the Magnolia Roller Vixens taking on the Hub City Derby Dames' Southern Misfits from Hattiesburg. For the Vixens, it will be the team's third home match of the year.

For older fans who grew up seeing roller derby on late-night cable television, the match will give them a chance to relive some glory days. But everyone attending, even those unfamiliar with roller derby, will witness an entertaining night of action on skates while contributing to a worthy cause.

The theme of this weekend's bout is "Freedom and Independence," and proceeds go to the Coalition Against Domestic Violence in support of "freedom from violence." The MRV encourages fans to wear patriotic attire in red, white and blue.

Roller derby combines pure athleticism with the spectacle of pro wrestling like nothing else. The women on the track display larger-than-life personalities similar to wrestling superstars, but these ladies are usually far more entertaining than their squared-circle bulky counterparts.

The athletic aspect is evident just watching this rough-and-tumble contact sport. Here's a brief synopsis for roller-derby neophytes—the sport is more complex than this, but it's a start.

Two teams of five skaters hit the oval or circular track, where one team tries to score points while the other defends. The normal time for a bout is 30 minutes. One team scores during a "jam." Only one player, called the "jammer," can score by lapping members of the opposing team.

The other four members of the jammer's team are defenders. One defender, or blocker, on the team can be a designated "pivot" and can become a jammer later in the match. Blockers use physical body contact and other tactics to help the jammer score points.

As in hockey, referees can penalize skaters for illegal contact and tactics, forcing them to spend time in a penalty box. And, as in every sport, the team with the most points at the end of the night is the winner.

This is the fourth season for the Magnolia Roller Vixens, but it's the team's first season as full members of the Women's' Flat Track Derby Association, the international governing body for the sport. The WFTDA is a membership organization for leagues to collaborate and network. It sets the standards for roller derby rules, seasons and safety, and determines guidelines for the national and international athletic competitions of member leagues. The Magnolia Roller Vixens became members in December 2012 after completing the WFTDA apprentice program.

Doors open for Independence Slay at 6 p.m. and the bout starts at 7 p.m. at the downtown Jackson Convention Center. Tickets are $12 in advance online and $15 at the door; children get in for $5; active or retired military with military IDs can buy up to two tickets for $10 each. Local radio stations Y101 and Z106 are giving away free tickets this week to a few lucky listeners.

Email [email protected] or visit magnoliarollervixens.com for more information or to buy tickets.