In Her Words: Myrlie Evers-Williams 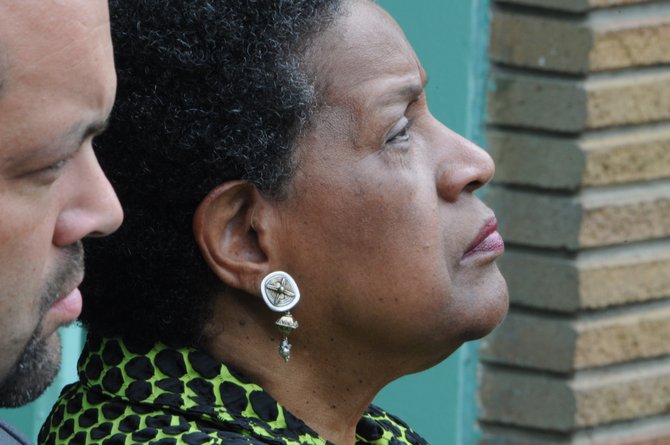 Members and friends, for some reason I feel just a little bit nervous. That's unusual, but I think it's emotion more than anything else--emotions that have all of you here, my daughter here. Seeing where we have come from 50 years ago, I've seen Tougaloo accept the gift from the Evers family and to move forward into the future with all that can be done with this gift, I thank you.

I see so many people here who have played such a major part in my life, and I want to thank all of you for what you have done in the name of freedom, justice equality and, quite honestly, of not forgetting Medgar Evers. It's been a long and terrible journey of trying to keep his memory alive. It's a little difficult not to become emotional when I set foot on this soil. I don't care how many times I do it. The memories, the flashbacks, keep coming, and perhaps that's a good thing because it serves as a very strong motivator to keep going regardless of how tired one becomes, to keep going regardless of how old one becomes but in keeping that spirit alive in the name of Medgar Evers and so many others who played such an important role in helping America reach the point it is today.

I am so proud to have been part of the NAACP. Even though there were times that we had disagreements--and don't we as a family?--the goal remains the same: freedom and justice and equality for everyone.

Let me share just a little bit of emotion with you, and I won't take much time. Driving on Guynes Street--that was the name then; it is now Margaret Walker Alexander--the stomach tends to get queasy. I don't care how many times it happens.

You pull into the driveway, and one relives what went on that night--early morning--of June 12, of Medgar driving in to the driveway, the children in the bedroom on the floor saying, "There's Daddy." They knew the sound of the motor, and Medgar had made a promise that he would always come home a different way--either from that end or this end of the street--and that he would never get out of the car on the driver's side because of the threats that had been made, the firebombing of this house. That night, tired, literally worn out he got out on the driver's side. And as soon the children said, "There's Daddy," the shot rang out--one the loudest and most powerful I had, and still have, ever heard in my life, and I knew exactly what happened.

Rushing to the door, I found this man who was strong enough to endure being shot in the back and his chest being blown away still alive holding his keys, and all I could do was scream. Because the night before we had talked about this very thing happening, and I asked, "What else can I do to help?" And he said "You're doing it all; just take care of my children." And I said, "Of course, I'm going to take care of your children; they're mine, too."

We sat in this room, which is the living room, which faced that wall facing the carport because this one was too dangerous because of the glass. And we sat there and held each other and cried because we knew that the time was near.

I won't go through the rest of it except for one little part to tell you how south--how southern--this is: When the bullet struck him in his back, it forced him forward. He had his keys in his hands and fell up the steps. The bullet ricocheted through this window, hit the wall, went through that wall, knocked off a piece of aluminum tile, struck the refrigerator and left a hole in the refrigerator, and the bullet landed on the countertop next to a watermelon. And I said how southern we are -- even in death, even in something like this.

But the spirit of the man never died. It lived and lives today. I remember those three children crying, "Daddy get up, get up, get up. Daddy get up." I won't go on with the rest of the story. But to say to you that 50 years later, it is almost as fresh to me as it was that night. And I had made a promise to Medgar the night before that if anything happened to him, and I survived, that I would be sure that justice would be served. It took years to get to that point, but justice was served.

I was called crazy, among lots of other things that I will not repeat here, for pushing for that and pushing for other things. And I guess the lesson in that is: believe. Believe in something that you are willing to give your all for. That grammar might not be correct, but I think you get what I'm saying.