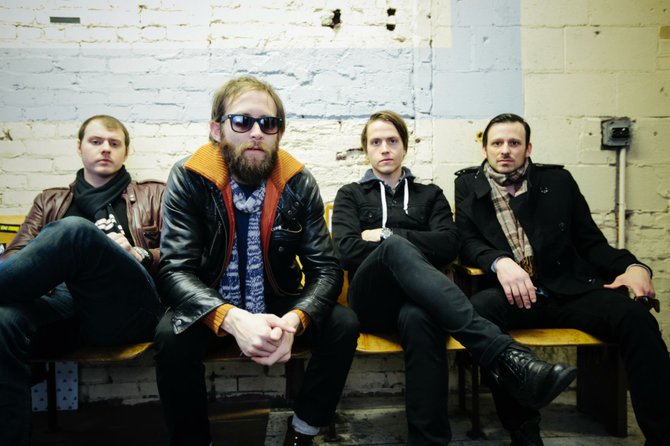 The members of Indiana-bred rock-and-roll crew Modoc have certainly been industrious with their time. In the past year, the band released its first full-length album "Fortune & Fame" and played at South by Southwest Festival in Austin, Texas. The band's song "Devil on My Shoulder" was also featured in the promo for "666 Park Avenue," ABC's cancelled drama about a hell-spawn high-rise.

Yet despite all the independent success the bandmates have enjoyed and built upon over the years, Nashville's Zavitson Music Group still managed to snatch them up in late February. For lead singer Clint Culberson, the decision to sign to a label came about from a sense of compatibility and comfort with the staff at ZMG.

"I think it's interesting with ZMG," Culberson says. "I suppose they said, 'These guys are already making records on their own,' and they genuinely believed in us. Having them behind us offers freedom in music, but also mentally, so we can concentrate on the performance and creative aspects.

"With the label—and it isn't like this for most people—there aren't too many cooks in the kitchen. We lucked out a lot at being able to say 'no.'"

Culberson and his Modoc cohorts met with ZMG through their current manager Eric Hurt, who happened across the band at a performance. As the singer put it: "It's that whole cliche story that sounds fake, but he (came) up to us after the performance and said, 'I want to support you guys.' He wanted nothing in return. We've honestly been like a big family ever since."

That "big family" developed over the course of decades. Though they say their first official meeting happened in college, the bandmates brushed shoulders all through their childhoods, with some members attending the same church or playing tee-ball together. Culberson, on the other hand, grew up just a few miles away from his future friends near Muncie, Ind., in a little town called Modoc, with only 36 students in his graduating class.

"When I started college, I was doing this acoustic folk stuff at the time," Culberson says. "There was this guy in Florida who wanted me to come down there and said, 'I'm going to make you famous, and you're going places.' I was cautious about it. I said to our guitarist Kyle (Addison), who was my roommate, 'If this turns out to be a bust, we're starting a rock 'n' roll band.'"

Shortly after Culberson returned from Florida, gears began to turn, beginning with their soon-to-be drummer John Carlson moving in with Culberson and Addison. The line-up rounded out with the addition of bassist Caleb Crockett, whom the friends thought played bass guitar purely because he owned one.

"It was so perfect, because we all became such close friends, and that's how it started," Culberson says. "They're all just creative and great musicians. We can be super honest with each other about the music or anything, which causes problems sometimes, but in the end, we're all better for it."

Even prior to signing to a label, the band was in a state of evolution, as they discovered what made the group unique and effective. "I used to think it was the vocals that made us stand out, and in a way, that's still true, but I think the anthem-singing has come into style," Culberson says. "I feel like playing rock 'n' roll, and being genuine about it, isn't as common anymore."

Culberson says Modoc considers itself, more than anything, a performance band, and the members most look forward to their involvement with music festivals throughout this summer, including the massive Milwaukee Summerfest and St. Louis' fledgling Loufest, where Modoc will play alongside rock contemporaries The Killers, Wilco, Alabama Shakes and The National.

"We're definitely a live band at heart, so we get pumped about playing bigger gigs and reaching bigger audiences,"  Culberson says.