The Crest of the New Wave 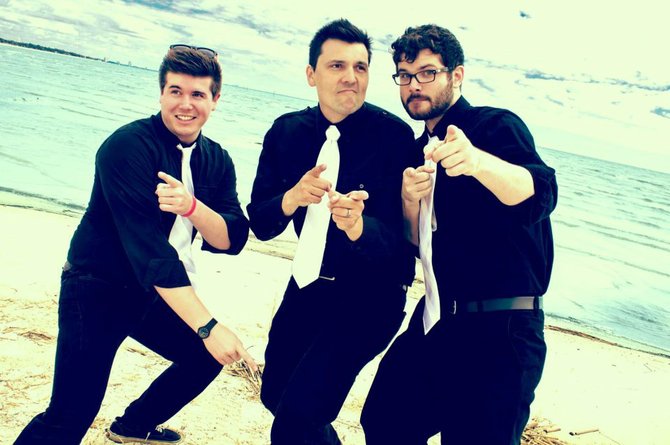 Taking the back entrance into the band's rehearsal space, I was surprised to find myself standing in a vast cathedral with vaulted ceilings, wood paneling and burgundy flooring throughout. I was awestruck at how this band, all dressed in black, would have access to a setting like this. As it turns out, the band members attend the church and play as part of the "house band."

Daniel Guaqueta, the 36-year-old drummer, introduced me to his other two mates, guitarist Brent Varner, 23, and bassist Tyler Baker, 24. This trifecta of talent became Buddy & the Squids after a chance meeting at the church during the summer of 2011.

"We came up with the name on a whim that same day," Guaqueta remarks. Right from the get-go, the guys knew they wanted to form a surf rock group, knowing it would be unique to the already eclectic Jackson music scene. The chemistry was immediate. In his excitement, Guaqueta posted a thread on Facebook about his new instrumental surf band and, just as quickly, Arden Barnett stepped up, offering to manage the group without hearing the first note of music. Building and maintaining a solid reputation in an otherwise cutthroat industry certainly has its perks.

As I walked the room looking for the ideal pew, I came to rest where I thought the sound was most pleasing for the remainder of the practice session I'd interrupted with my late arrival. The band began to play their offbeat blend of '60s surf rock meets the music of the Spanish conquistador—"A spaghetti western in flip flops and florescent shorts," Guaqueta says.

From beginning to end, the band played the self-financed and self-titled EP it'll be promoting and selling at the upcoming CD Release Party at Morningbell Records June 7.

The musicianship impressed me. Occasionally, Baker would use a pick on his bass, bringing out more of the high end before switching back to the more traditional style of finger picking, effectively creating a greater range of dynamics. The warbling soundscape of Varner's guitar work produced perfectly complemented the counterpoint melodies of the underlying bass lines. Using mostly single-note riffs, he sometimes swept across a variety of chords, bending them in and out of tune in '60s surf tradition.

Bringing it all together with a foundation as solid as the one holding the cathedral up, Guaqueta pounded away on his drum kit with what seemed like careless abandon. But I know what controlled chaos looks like, and Guaqueta mastered it with acute precision.

Although the songs are cohesive in scope, the guys are not afraid to drift off into odd time signatures and well-crafted endings, in a style that reminded me of such bands as Rush, Tool and King Crimson. As each one ended, I was left wanting more.

Buddy & the Squids plays an all-ages show at 8 p.m. June 7 at MorningBell Records (622 Duling Ave., Suite 205A, 769-233-7468). The $10 cover includes a free CD, Buddy & the Squids sunglasses and a shiny little button. Go to buddyandthesquids.com or morningbellrecords.com for more information.