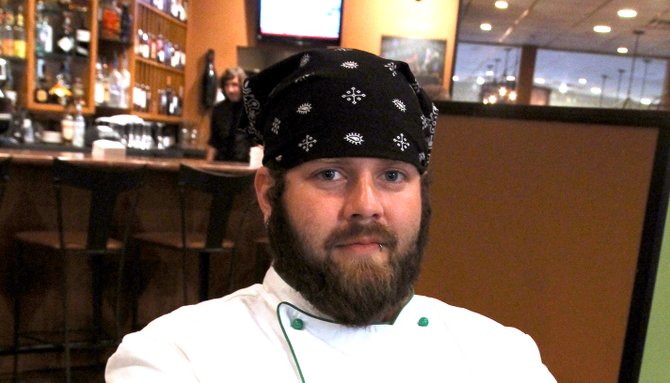 For most non-vegans, a fully non-animal diet could seem a bit crazy, bland or not filling. But Matt Mabry, 29-year-old sous chef at BRAVO! Italian Restaurant and Bar, wants to tear down those stereotypes. He's starting by offering upscale vegan food once a week at BRAVO!.

Mabry, a native of Brandon, started cooking when he was in high school. "I worked at pizza places all through high school," he says. It took him a while to realize it, but Mabry finally decided that cooking was something that he wanted to do for a living.

"I was doing this for a long time without liking it, and then I all of a sudden realized that I enjoy doing this," he says.

Mabry, who has been working at BRAVO! for six years, was encouraged to launch the vegan dinner Thursdays because he has been a vegetarian for nearly two years, taking up his wife and 5-year-old daughter's vegetarian lifestyle. "My daughter has never eaten meat, and my wife hasn't eaten meat in seven or eight years," Mabry says.

As a chef, Mabry is able to cook interesting, dynamic dishes that cater to his family's lifestyle. Many people struggle to find options catering to vegan and vegetarian needs outside their own kitchens, especially in upscale restaurants.

"One thing that I am offering is a fine dining aspect," Mabry says. "I'm offering something a little more creative than a veggie burger or a frozen substitute."

Though the food is focused on vegans, Mabry wants everyone to enjoy his dishes. "The confidence of being a chef is that you don't hope people will like your food, you know they will," he says.