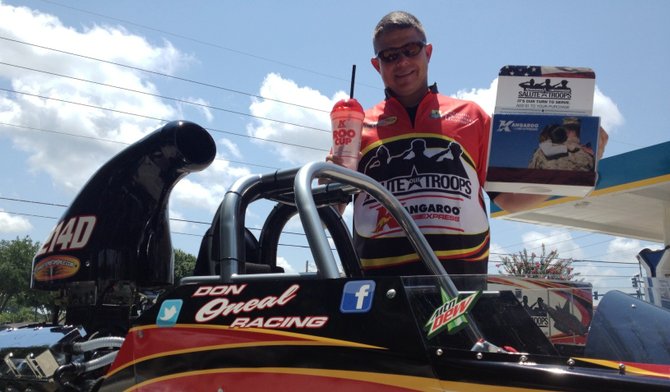 The very words conjure up images of dark roads and young men racing for fun and a bit of mischief in sporty—and sometimes not-so-sporty cars: drag racing. For retired Army veteran Don O'Neal, drag racing is a tool to make a difference and support his military family.

These days, O'Neal races not for glory but for community and in the memory of his father. His father was a devout racing fan and a Vietnam War veteran who inspired his son to do what he wanted to do.

This sumer, O'Neal is touring with the Kangaroo Express "Salute Our Troops" campaign to raise awareness and money for the United Service Organization—the USO—and Fisher House Foundation, which provides low-cost or free housing to vets and their families undergoing treatment at VA centers. The "Salute Our Troops" mission is to provide resources to veterans so that they can live independent lives and to empower them to overcome their wounds of war.

North Carolina native O'Neal, 40, is an easy man to talk to.

"When I was a kid, I always wanted to (race), and it wasn't until my dad died while I was in the Army that I really started to miss it," he says. "When I race, it makes me feel closer to him."

The single father of a 12 year-old daughter, Logan, O'Neal understands the importance of youth educating themselves and taking learning seriously.

"If you told me 22 years ago—back when I was in high school—that the things I was learning in school, like math and science, really would matter in my adult life, I would have laughed till tears came rolling down my face," O'Neal says. "All I cared about was playing baseball and hanging out with my friends. I didn't think that having a foundation in those simple things would really make a difference. They really do. In whatever field you're in, the basics always matter."

Accompanying O'Neal on the tour is his daughter and Tommy Rieman, who has more than 14 years of Army service. During Operation Iraqi Freedom, Staff Sgt. Rieman distinguished himself with acts of conspicuous gallantry and courage under fire, for which he was awarded the Silver Star and Purple Heart. The U.S. Veterans Corps named Rieman its 2013 Veteran of the Year.

"I want to show my daughter the value of helping and giving back," O'Neal says. "Right now she's meeting so many new people and seeing different places. With Kangaroo Express and the 'Salute Our Troops' tour, my daughter is getting the chance to be a part of something bigger than herself, and she will never forget it. You have to build a foundation on solid ground, not sand. I tell her all the time: 'You have to look outside of yourself. I'm not going to always be there. You have to ask yourself, what would Dad think of this?'"

O'Neal drove the U.S. Army dragster from 2004 to 2012 with an appearance in the final round at the 2010 U.S. Nationals at Indianapolis. O'Neal represents JBM Motorsports based in Evansville, Ind., This summer, he will race the 2009 Mullis Salute Our Troops Dragster in National Hot Rod Association (NHRA) and Lucas Oil Racing events.

The 'Salute our Troops' tour will be in the Jackson area Thursday, July 18, at the following times and locations: