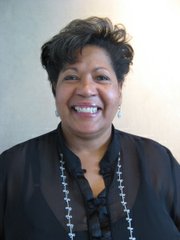 Now 57, Evers-Everette witnessed her father's assassination in 1963 at their Jackson home when she was 8 years old. The former state field secretary for the NAACP, Medgar Evers made many efforts during the Civil Rights Movement to end racial inequality and social injustice in America.

Born in Mound Bayou, Miss., Evers-Everette studied business merchandising at New York's Fashion Institute of Technology. Through the Medgar and Myrlie Evers Institute, she will recognize the 50th anniversary of her father's assassination with events in both Jackson and Washington, D.C., this summer.

Evers-Everette served as logistics coordinator and speaker of a project known as Sojourn to the Past, which enables thousands of high school students across the country to visit the South to learn about the Civil Rights Movement. Honored by the U.S. Congress and others, Sojourn to the Past attempts to compensate for the lack of civil rights information in educational curriculums.

"Evers-Everette was inspired and humbled by her father's courageous leadership and integrity, and she seeks avenues to continue his mission," the Margaret Walker Center said in a press release.

Evers-Everette is keynote speaker for the 2013 Martin Luther King Jr. Convocation at Jackson State University. She is also receiving the 18th annual For My People Award at a luncheon to follow this Friday, Jan. 18 at 11:45 a.m. in the JSU Student Center Ballroom. Along with the B.B. King Museum and Delta Interpretative Center, the Margaret Walker Center is honoring Evers-Everette for her impact in preserving African American history and culture. James Meredith, Lerone Bennett and Jesse Mosley are among the past recipients of this award. Due to limited seating, luncheon tickets can be reserved for $10 through the Maragret Walker Center at 601-979-2055 or [email protected]

I saw your Mom on MSNBC this evening with Rev. Al Sharpton. She was so expressive and evoked memories of seeing her in Vicksburg, MS. Does Mrs. Merlie Polk ring a bell?

I look forward to seeing her in DC for the Invocation at President Obama's Inauguration. I am impressed with the wonderful work you do that keeps your father's legacy alive and promotes your mother's continued struggle to preserve their historical contributions to Civil Rights.