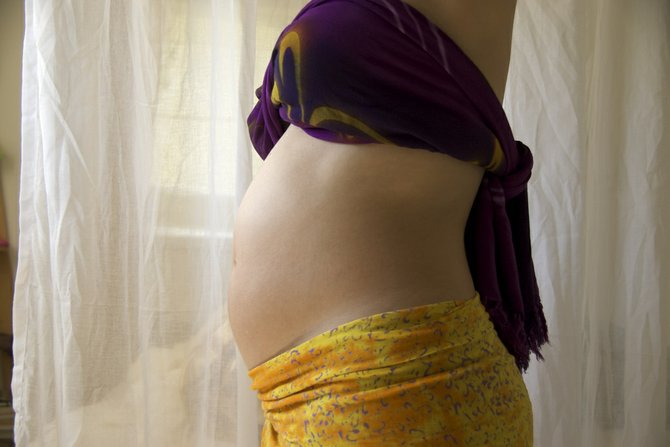 She also advises them to avoid gasoline fumes, pesticides, certain types of fish and some household cleaners and cosmetics.

"It's only for nine months," she tells them. "Let someone else put gas in the car."

But Flynn is in the minority. A new nationwide survey of 2,600 obstetricians and gynecologists found that most do not warn their pregnant patients about chemicals in food, consumer products or the environment that could endanger their fetuses. More than half said they don't warn about mercury, and hardly any of them give advice about lead, pesticides, air pollution or chemicals in plastics or cosmetics.

Many doctors say their priority is to protect pregnant women from more immediate dangers, and that warning them about environmental risks may create undue anxiety. Some say they don't feel confident in their ability to discuss the topics.

"We're worrying about pre-term labor, obesity and hypertension," said Dr. Jeanne A. Conry, an ob/gyn at Kaiser Permanente in Roseville, Calif., and incoming president of a national medical society. "Obesity trumps almost everything. We put our time and energy there, and don't dwell on some of the other things we should be aware of."

Virtually all pregnant women have chemicals in their bodies that might harm fetal development.

Monitoring of pregnant women found about 100 different chemicals, with 43 of them in all women tested. Lead, mercury, toluene, perchlorate, bisphenol A, flame retardants, perfluorinated compounds, organochlorine pesticides and phthalates are among the chemicals, according to the U.S. Centers for Disease Control and Prevention's nationwide testing program.

Studies suggest that for many these compounds, low-level exposures in the womb seem to disrupt development of the brain or reproductive systems. Others may raise the risk of birth defects, or lead to cancer, immune problems, asthma, fertility problems or other disorders later in life.

Yet that information is not reaching most women who are pregnant or may become pregnant.

Even fewer physicians warned their patients about two chemicals in consumer products that are often in the news: bisphenol A (BPA) at 8 percent and phthalates at 5 percent. Nine percent of the doctors told their patients about polychlorinated biphenyls (PCBs), industrial compounds often found in fish.

The results show a disconnect between environmental health research and what the physicians do - and do not - tell their patients, said Patrice Sutton, a research scientist at University of California, San Francisco's Program on Reproductive Health and the Environment who helped design the survey. The goal of the study, which was discussed at a recent conference but is not yet published, was to try to break down obstacles that keep health messages from pregnant women.

For instance, even though the dangers of mercury are well established, only four out of every 10 doctors said they discuss the contamination with pregnant women.

Since 2004, the U.S. Environmental Protection Agency and the Food and Drug Administration have warned pregnant women to avoid eating high-mercury fish such as swordfish and shark and to limit consumption of albacore tuna. In addition, the American Congress of Obstetricians and Gynecologists issues statements to its members on the importance of patients avoiding mercury in fish.   Yet an estimated 300,000 newborns each year - one out of every 14 - are exposed to levels of methylmercury that exceed the guidelines that the EPA set to avoid neurological effects in fetuses. Mercury in the womb has been tied to reduced IQs and other effects on developing brains.

Dr. Naomi Stotland said warnings over mercury could result in women eating less fish, which is a low-calorie protein rich in omega-3 fatty acids critical for a baby's brain development.

"Mercury in fish is a tricky one," said Stotland, who practices at San Francisco General Hospital and was lead investigator on the survey. "Fish is such a good protein source for women, and they're probably not eating enough of it. I give out printed materials that direct them to fish with lower levels of mercury," such as sardines, herring, pollock, shrimp and scallops.

"Most of my patients don't even read food labels. Are they carrying around the fish list? I worry, and I know other colleagues worry, that women will replace fish with processed hamburger. I don't think it's such a simple message."

Dr. Jane Hightower, who practices internal medicine in San Francisco, agreed that the warnings are confusing but said ob/gyns should take more time to learn about food and contaminants.

To make ends meet, there are too many patients crammed into the schedule. Food science literature and environmental toxicant literature are difficult to sort out, and the doctors are not being taught about nutrition or contaminants in school," said Hightower, who has authored a book and several scientific journals reports about unhealthful levels of mercury in fish.

Despite evidence that environmental factors contribute to many health problems, medical students report fewer than six hours of environmental health training, according to University of Texas School of Medicine researchers.

"The whole medical establishment needs to look at themselves and start evaluating old practices that might not be so safe for the patient in the long run," Hightower said.

Flynn holds pre-pregnancy counseling sessions with her patients, who are mostly middle-to-upper class women living in San Francisco. She gets a lot of questions about environmental chemicals, sometimes from prospective mothers and sometimes from the mothers of young patients. She said the role of the ob/gyn is changing as environmental chemicals are gaining more attention as agents of defects and disease.

Twenty-five years ago, "people were not quite as cognizant. Now they ask for the resource, or a reputable web site. Before the internet that was not an option," she said.

Flynn goes further than most by telling women they can reduce BPA exposure by not buying canned foods and beverages with resin liners, and that they can avoid cosmetics and plastics containing chemicals called phthalates.

"Most of my patients don't ask me about environmental exposures. They don't ask about cosmetic products, bisphenol A or organic foods. Most don't have high-speed Internet access, and don't read articles and get alerts."

Many of her patients clean buildings and houses or work in nail salons, and struggle with staying away from harmful chemicals. She encourages individual solutions such as cooking at home and avoiding processed foods packaged in plastic. She's trying to push baking soda and vinegar instead of toxic cleaning products.

Even though Stotland's patients are low income and probably at higher risk, she said she wasn't talking to them about environmental health until recently. Many doctors in the response comments of the survey said they were concerned about making patients feel overly anxious.

"The social circumstances are so burdensome. Some colleagues think the patients are already worried about paying rent, getting deported or their partner being incarcerated," Stotland said.

There are many scientific uncertainties about the dangers to fetuses, so clinicians can only proceed with caution.

For example, Conry said there is a lot of research on the effects of BPA, particularly in lab animals, but doctors don't know how to interpret the results. "So, it hasn't resulted in a change in practice patterns." Research on environmental chemicals is difficult for clinicians to understand because it differs from what they are used to with pharmaceuticals, she said.

Almost every obstetrician and gynecologist has a desk reference for pharmaceuticals, she said, but "it doesn't have any sections on environmental toxicants. There isn't an easy resource for physicians to use."

"In the case of pharmaceuticals, the onus is on the pharmaceutical company to do the research with toxicity testing, randomized control trials and post-exposure observational studies," Conry said. "With environmental chemicals, the manufacturer puts out a product, and the onus is on the regulatory bodies, environmental groups and lay public to find problems and study the effects."

Conry, who will become president of the American Congress of Obstetrics and Gynecologists in May, urges a stronger role for physicians. She is co-author of a paper with Stotland, Sutton and four others concluding that physicians should intervene as early as possible to help women prevent harmful exposures.

For the first time a year ago, the ob/gyn society stepped into a policy-influencing role in environmental health issues. Its president, James N. Martin, wrote a letter to the EPA urging the agency to consider links between prenatal exposure to the insecticide chlorpyrifos and birth defects before deciding whether to ban agricultural uses.    In the new survey, 89 percent of the doctors said guidelines from the American Congress of Obstetricians and Gynecologists would be the most helpful in gaining information on environmental health.

"As a society, we have a lot of work to do both in terms of informing women of dangers and helping them find alternative jobs when they're pregnant," Stotland said. "This is society's job. Clinicians can't fix the problems in their offices."

To read advice for pregnant women, try these websites:

The most important thing an expectant mother can do to insure the mental and physical health of her child is to marry a good man before she gets pregnant. Unmarried motherhood is a one-way ticket to a lousy wife for your child. It is the #1 predictor of health, education, and employment.