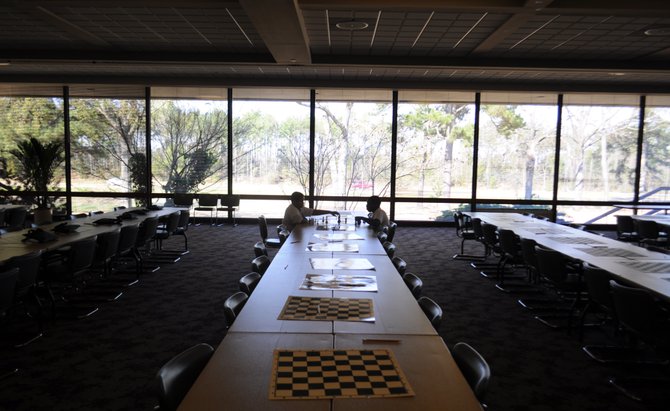 Montessori schools are schools that focus on mixed-age classrooms, student choice of activity from within a prescribed range of options and uninterrupted blocks of work time.

Snider explained that students practice one out of five class hours scheduled each week in Open Doors, JPS' program for gifted students.

"Chess is part of our math curriculum. Students start in August using the teaching board," Snider said. "We have lesson plans and teach students to use an algebraic grid to make strategies." Students also have an opportunity to play against a computer this year.

Snider said she learned to play chess while teaching her students.

Chess involves strategy, risk-taking and patience, with each player moving 16 game pieces on an eight-by-eight grid. The goal is to trap your opponent's king into a checkmate, leaving the king without additional moves. Players have to concentrate and visualize a sequence of strategic plays in advance in a game where they must frequently re-evaluate their plans based on the opponent's moves.

"It teaches them listening, thinking, group dynamics," Snider said. "Our students are high achievers. They have to have determination, persistence."

McWillie took first place in the middle-school category and second place in the elementary division. Reeves' students—Talia Buxbaum and P. J. Bryson—took first and second place, respectively, in the third-grade competition. Jabarie Robinson took fourth place. Six of Snider's fourth and fifth graders were among the top players in their categories, and three of her middle school students ranked among the top 10, including Matthew Araujo, who took third place in the middle-school division.

Snider said McWillie students participated in a series of competitions to determine who would attend this year's JPS event. This year's third- and fourth-grade winners plan to compete at the Mississippi Scholastic Chess Team/Individual Championships at Forest Hill High School later this month.

"This is independent of the school," Snider said, adding that McWillie students would compete as a team at the state event. "One of our students' father is organizing a team." Most of the students competing this year have placed in various other tournaments.

Reeves and Snider also include Scrabble in their curriculum as a math, spelling and language arts tool to enhance strategic planning, spatial relations and teamwork. Several of their students recently placed among the district's best at a Scrabble tournament.

Open Doors students have competed in chess tournaments for more than 20 years. At this year's tournament, more than 100 students from 28 JPS schools in grades three through six played five rounds.