Obama Says We Need to Fix Voting Lines. But How? 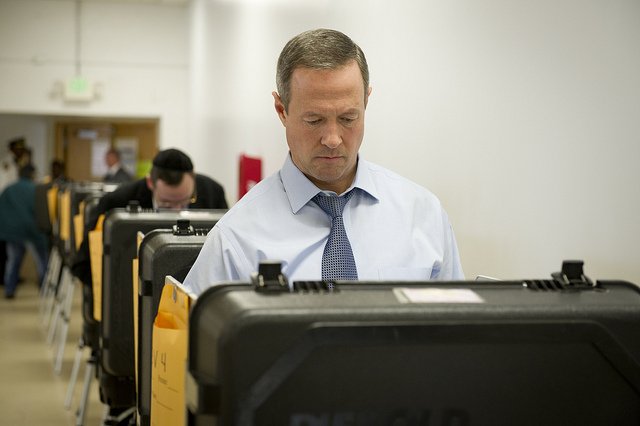 Though new research on states' performance in the November election reveals long lines kept thousands from voting, there's still much we don't know about what would best speed up the process. Photo by Courtesy Flickr/MDGovpics

At Tuesday's State of the Union address, Michelle Obama was joined by 102-year-old Desiline Victor, who, like many in Florida and elsewhere, waited hours to vote on Election Day.

"By the way," Obama said in his election speech. "We have to fix that."

But how to fix it remains unclear.

Though new research on states' performance in the November election reveals long lines kept thousands from voting, there's still much we don't know about what would best speed up the process.

Victor's home state of Florida had the longest average wait time of any state at 45 minutes. Victor waited for three hours. Other Floridians reported standing in line for up to 7 hours.

Not every voter had Victor's stamina: Professor Theodore Allen at Ohio State University estimated that long lines in Florida deterred at least 201,000 people, using a formula based on voter turnout data and poll closing time. The number only includes people discouraged by the wait at their specific polling site, and not those who stayed home due to "the general inconvenience of election day." The real number, Allen says, is likely much higher. One study also showed that black and Hispanic voters nationwide waited longer on average than white voters.

Another reason behind Florida's long lines was the state's incredibly long ballot, which listed the full text of eleven, wordy constitutional amendments. Detzner has proposed limiting constitutional amendments to 75 words, which could also save counties money. The 2012 election in Florida's St. Lucie County was roughly twice as expensive as 2008, a hike the county election supervisor blamed on printing, mailing and processing longer ballots.

Researchers say simply expanding voting hours and shortening ballots isn't enough. The U.S. needs to overhaul how they decide to allocate resources on Election Day. Many counties determine how many voting machines and poll workers to have in a district based solely on the number of expected voters. Others don't even do that, says Lawrence Norden, Deputy Director of the Democracy Program at the Brennan Center for Justice.

But the amount of time it can take to fill out a ballot can vary enormously by county or locale, because both ballots and machines can be different.

Yet the actual time it takes to cast a ballot is almost never considered. "How long the job takes should be taken into account when you provision the resources to do that job," Allen says. "If you just do it on head count alone, you're kind of being dumb."

Allen calls that "dumb" approach "naive allocation." According to his team's research, counties could cut hours off of waiting time by shifting more machines to places with longer ballots. "By simply acting smarter, we could cut the waiting time to 1/4 of what it would have been," Allen says.

Changes in voting technology can also result in voters spending more behind the curtain. After 2000's "hanging chad" disaster, many states turned to electronic voting machines. The touch-screen machines are easier for many to use, and encourage voters to weigh in on every item up for vote. But they can also take twice as long to vote on, Allen says. And strapped city budgets are reluctant to shell out thousands of dollars per machine to make up for longer voting times.

Overall, average line waits have held fairly steady for the past ten years, says Professor Charles Stewart III of MIT. The problem is not necessarily getting worse, but it's not getting any better, either.

"Studies show it's the same places that keep having the same problems," says Norden of the Brennan Center, referencing Stewart's findings. "We tend to forget quickly after the election the problems that we had."

And as Norden points out, "a lot of private companies have figured these things out in other contexts. There's a reason2026McDonalds never seems to have nine-hour lines."

The most important thing, Stewart says, is conducting more research on what keeps lines long year after year. "This is a persistent problem and it's one that we need to address," he says, "but it's not one [where] there is a magic bullet."

Certainly a country that put a man on the moon over fifty years ago can figure out how to put a 102 year old on a voting machine shorter than seven (7) hrs after arriving at her poll.

This "HOW" query sounds primitive.