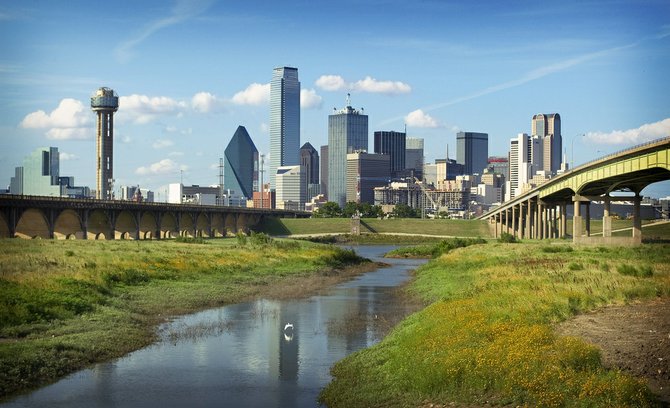 HUD has accused Dallas, Texas, of discriminating against black, Latino and disabled residents.

This story appeared on ProPublica.

The U.S. Department of Housing and Urban Development has accused Dallas, one of the nation's largest cities, of violating civil rights law through housing practices that discriminated against black, Latino and disabled residents.

HUD officials laid out the results of a four-year investigation in a letter sent to city leaders late last month. HUD found that Dallas, which accepted tens of millions in federal dollars with promises of using that money to help integrate the deeply divided city, had instead "subjected persons to segregation" and "restricted access to housing choice." The city, the letter said, had denied local residents opportunities to participate in housing programs "because of race, national origin and disability."

The agency has given the city 30 days to respond to the accusations, which jeopardize millions in annual HUD funding.

HUD's findings against the country's 9th largest city cap a year that has seen some of the most substantial developments in federal fair housing enforcement in years. As ProPublica documented in a series that ran late last year, the federal government has spent the last 45 years largely neglecting provisions of the Fair Housing Act that require it to take affirmative steps to eradicate housing segregation. The chief way to do that has been to cut off federal funds to communities that act in ways that maintain or increase housing segregation. But HUD never did.

When President Obama came into office, the nation's top housing officials vowed to change that. "Until now, we tended to lay dormant," Ron Sims, HUD's then deputy secretary said in August of 2009. "This is historic, because we are going to hold people's feet to the fire."

Still, little improved during Obama's first term. That appears to be changing.

While HUD may not have turned into the raging Goliath that activists had hoped, the giant is stirring.

This year, HUD released a proposed regulation that for the first time clearly defined the steps local and state governments that receive HUD funding must take to show they are complying with the Fair Housing Act. Advocates have waited decades for HUD to issue the rule, which was shelved by the Clinton Administration in the face of objections from counties and cities.

HUD's history has been dominated by its deference to the cities and towns it funnels billions of dollars to--even those sued by the U.S. Department of Justice and those found guilty by federal judges of violating civil rights. When outside parties have alerted HUD to the ways government officials have discriminated through building and zoning--such as in the landmark Westchester County, N.Y. fair housing case that settled in 2009 -- HUD hasbeen reticent to get to take serious steps.

That's why the Dallas findings could be big.

Similar to the Westchester case, HUD was alerted to the possible wrongdoing of Dallas officials by a whistleblower, in this case a developer who'd had affordable housing blocked in a downtown district that is white and affluent. The developer, Curtis Lockey, accused Dallas officials of conspiring to keep black, Latino, and disabled residents out of downtown. Lockey filed a complaint with HUD in February 2010.

HUD refused to get involved with the Westchester case until a federal judge overseeing the case began lambasting HUD for its failures to enforce the Fair Housing Act. But Dallas was different--HUD investigated and confirmed Lockey's accusations.

Dallas officials deny wrongdoing. The City complies with HUD guidelines and regulations in its work with affordable housing projects," said a Dallas spokesperson in a statement.

Before this year no locality had ever lost its HUD dollars over failures to comply with civil rights laws. But this fall, HUD stripped $7.4 million in federal development grants from a Westchester County for failing to comply with the Fair Housing Act.

HUD's new efforts have caught the attention of major housing industry players who have long opposed heightened fair housing enforcement. Just this week, the American Banker published a piece questioning whether the agency's hiring of a former National Fair Housing Alliance staffer to handle enforcement represents a conflict of interest. (HUD says there was no conflict.) By the time the article ran, the HUD official in question, had been heading fair housing enforcement for more than three years.