JACKSON, Miss. (AP) — Former Mississippi Gov. Bill Allain, a Democrat who appointed significant numbers of women and minorities to government jobs and strengthened the executive branch by removing legislators from state boards, died Monday. He was 85. 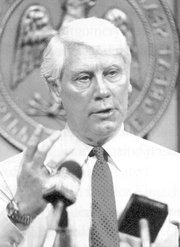 Bill Allain, former governor of Mississippi, died Monday at the age of 85.

A law associate, Louis Clifford, said Allain had been hospitalized for about two weeks with pneumonia.

"His mind remained sharp to the end," Clifford said.

He was the first Mississippi governor in modern times who could have run for a second consecutive term after the ban on gubernatorial succession was lifted in 1986, but he chose not to seek re-election. After leaving office, Allain returned to private law practice and rarely participated in events with other former governors.

Allain was among the first lawyers to represent the state in a prison crowding case and the Ayers college desegregation case, both dating from the 1970s. As an assistant attorney general and in his private law practice, Allain built a network of acquaintances that helped him win the attorney general's race in 1979.

He wouldn't say which of his statewide jobs he preferred.

"As attorney general, you get up in the morning and you drink coffee and have breakfast and you go and you get your staff together and you say, 'Who we going to give hell to today?' And as governor you get up and do the same thing but your staff says, 'Who's giving us hell today?'" Allain told The Associated Press in 2001.

Associates say Allain's most significant contribution to public policy was restructuring state government. Through work he started as attorney general and continued as governor, legislators were booted off a number of state boards. That strengthened the executive branch in a state where the 1890 constitution creates a relatively weak governorship.

Allain also made government more inclusive by hiring numerous women and minorities. In 1985, he appointed Jackson attorney Reuben Anderson as the first black justice on the Mississippi Supreme Court.

In 1987, legislators overrode Allain's veto of a bill that funded a large-scale highway construction program by adding 3.6 cents a gallon to the fuel tax. Allain wanted to pay for the new four-lane highways by issuing bonds rather than increasing drivers' costs at the pump.

In recent years, Allain's eyesight had been failing but he continued to do work with Clifford's law firm in Jackson.

He was divorced before running for governor. He is survived by two sisters, Mildred Newsome of Houston, Texas, and Maggie Gibbs of Rankin County, Miss.; and several nieces and nephews.

His gubernatorial campaign in 1983 was marred by some of the most scandalous accusations in Mississippi political history. A Republican-funded campaign accused Allain of sexual improprieties. Allain vehemently denied the claims, and while they were widely reported in Mississippi and national media, none was ever substantiated.

Allain didn't shy away from questions about that campaign, though he told AP in 2001 that he was tired of journalists bringing them up. As for the accusations, he said flatly: "None of them were true."

Allain said his Catholic faith has helped him look back without bitterness. He said he held no grudge against those who spread the rumors.

Jim Roberts of Pontotoc, Allain's commissioner of public safety, said the 1983 campaign marked "a shabby era in government and politics."

"It severely dampened an otherwise wonderful public career," Roberts said in 2001. "I think he performed extremely well in spite of that."

Explaining his decision not to seek a second term as governor, Allain said during the 2001 AP interview: "I got a little tired. I mean, I'd been in the attorney general's office 16 years and I'd been governor for four years. With age and everything else, I just decided I didn't want to go campaign."

Allain didn't hunt or fish or play golf. In his spare time, he was a voracious reader of novels, histories and biographies. For years, Allain spent the holidays helping feed people in Jackson soup kitchens. He was quick with a smile and rapid-fire talk, often starting a thought in one place and winding elliptically through others before concluding. Friends said Allain's dry wit helped keep the world in perspective.

Beverly Wade Hogan, the current president of Tougaloo College, was director of federal-state programs in Allain's administration. She told AP in 2001 that Allain never allowed his staff members to take themselves too seriously. When others were fretting about their stress-filled jobs, Hogan recalled, "he would be like, 'Oh, who's going to remember this in five years?'"

GOVERNOR BILL ALLAIN WAS A TRUE CHAMPION OF THE COMMON MAN

“Once in a while Mississippi politics will produce a leader who has the courage and the talent to make a real difference for the working people of our state. Never has there been a better champion of the common man than the late Bill Allain. Both as Attorney General and as Governor, Bill Allain made it his business to keep the interests of the average Mississippian as his primary consideration in crafting public policy. Whether battling to keep utility costs affordable, insisting upon frugality in state government, or fighting to open up the closed doors of insider politics, Bill Allain always made it clear that he was the people’s advocate, without hesitation or apology.

His was one of the most tremendous legal minds of his generation. He knew the federal and state constitutions better than just about any other member of the bar. He could see into the future in ways that too few politicians can. In constitutional reform, in government accountability, in consumer and taxpayer advocacy and in fiscal responsibility he was decades ahead of his time.

It was my privilege to know and seek the advice and counsel of Bill Allain over the last several decades. He had an agile mind, a rapier-sharp wit, a wry sense of humor, and a devotion to the public good that never wavered. He was truly one of a kind, and Mississippi is much the better place thanks to the service of her talented son and faithful servant Bill Allain.”